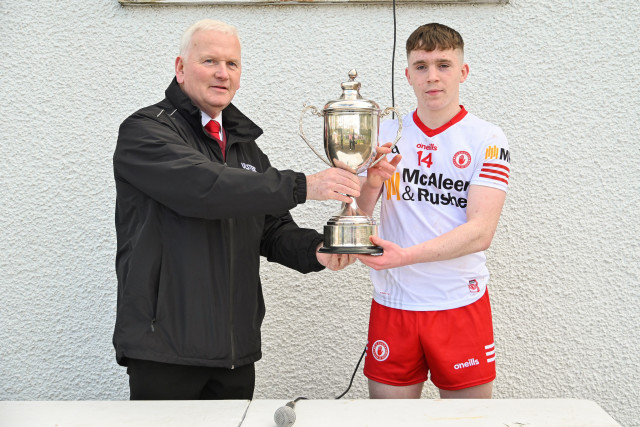 Tyrone held on by the minimum margin to see off Derry in an entertaining game and win the Jim McGuigan Cup in Glen yesterday. It means the young Red Hands effectively retain the cup from 2019, as the competition was not able to be concluded in the last two seasons, due to Covid-19 restrictions.

The teams were evenly matched  right the way through the first half  as Sean Hughes hit two points for Tyrone, with Eoin Higgins and Ryan McNicholl doing the same for Derry. Tyrone captain Eoin McElholm’s point from play levelled matters at 0-6 each just before the half time whistle. 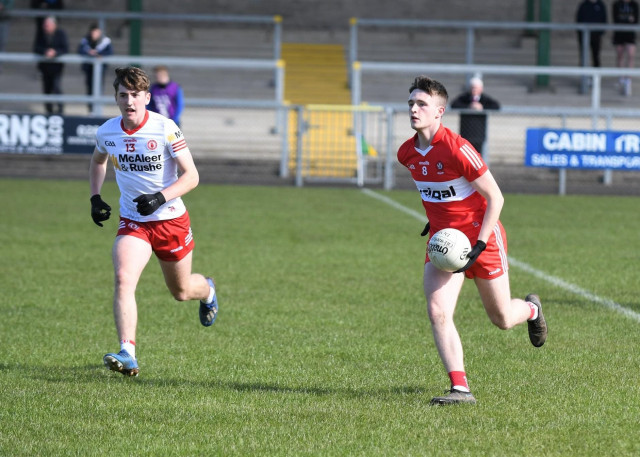 The second half continued to be a close and tactical contest with only three scores in the first twenty minutes before a Ciaran Chambers double made it 0-9 to 0-7 to give Derry the upper hand. The Tyrone lads responded strongly, however, with goals from corner-back, Conan Devlin, in the 54th minute and captain McElholm, in the 57th minute. Johnny McGuckin struck a goal back for Derry in the last minute to make for a tense finish to the game, but Tyrone managed to hold on for the victory.

Well done to both squads for an exciting game and the management teams will be happy that their Minor League campaigns have provided solid preparation for the upcoming Electric Ireland Ulster Minor Football Championship, which will see them in separate quarter final action on Saturday 23rd April.

Thanks once again to CLG Watty Graham, An Gleann for hosting the game and their hospitality.