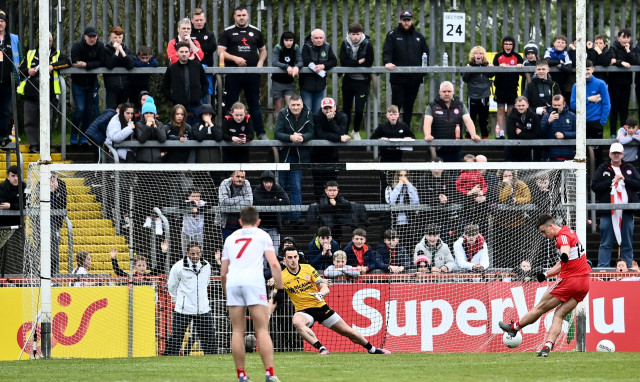 Derry recorded a memorable win at Omagh yesterday as they emphatically defeated Tyrone by eleven points to knock the reigning Ulster Champions out of the competition.

Rory Gallagher’s side were far superior from the first whistle to the last, and while two sendings-off for Tyrone didn’t help their cause, Derry’s win was thoroughly deserved.

They established an early lead through Conor Doherty and Niall Loughlin scores, then things really turned sour for Tyrone. In the 25th minute, midfielder Brian Kennedy was sent to the line for lashing out at Gareth McKinless, then moments later Paul Doherty was felled in the Tyrone box, and the resulting penalty was confidently put away by Shane McGuigan.

Another McGuigan free left things at 1-07 to 0-4 at the break, and a mountain to climb for Feargal Logan & Brian Dooher’s charges in the second half. A comeback was never on the cards however as Derry held a tight grip on proceedings, and scores from McGuigan, Loughlin, Benny Heron and Emmet Bradley pushed them further in front by the end.

Points from Darren McCurry and Darragh Canavan brought Tyrone’s total up to the double figure mark, but they were never allowed to get the crucial goals they needed to bring themselves back into the game. The Red Hands misery was compounded when Conor McKenna was dismissed in the closing stages. 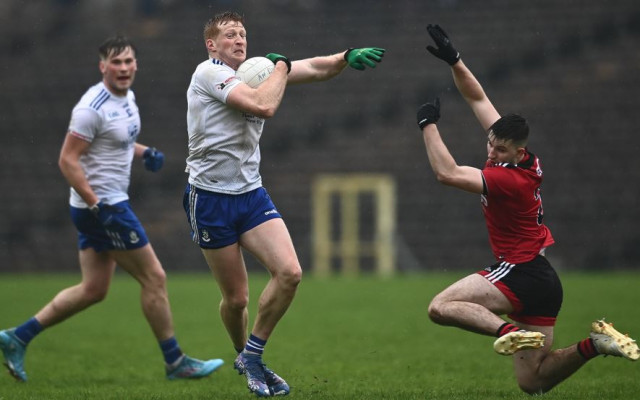 Monaghan meanwhile also booked their place in the final four with a one-sided victory over Down in Clones on Saturday.

Goals either side of the half-time break by Caolán Mooney and Pat Havern threatened to make a contest out of it, but Seamus McEneaney’s men regained their composure to outscore Down by 11 points to three thereafter.

A more assured Monaghan team took control of the game from the outset, and points by Rory Beggan, Jack McCarron and Kieran Hughes had the hosts four clear before Down eventually opened their account with a 15th-minute score by Havern.

The Farney men kept the sores coming though with McCarron, Conor McManus, Gary Mohan, Andrew Woods and Beggan stretching their lead out further, before a Conor Poland point and a goal against the run of play by Caolán Mooney gave Down some hope by half-time.

Havern’s goal at the beginning of the second half made it a two-point game, but Monaghan quelled any chance of a comeback with Mohan, Conor McCarthy, McCarron and McManus all rattling off points. Jack McCarron finished the day with 0-7 to his name as the home side dominated the final quarter.