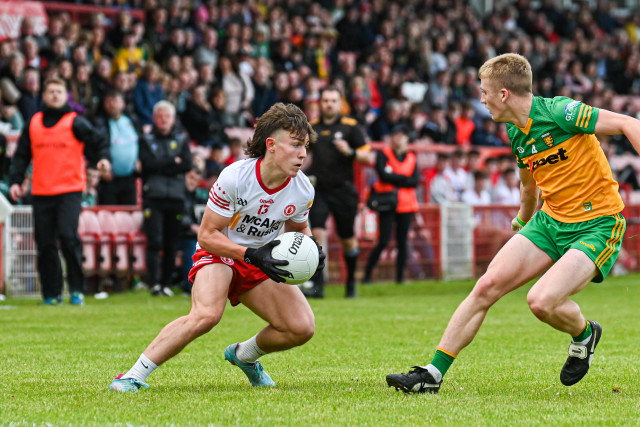 The game had finished 1-10 to 0-13 after extra time at Celtic Park on Saturday evening, with a late goal from Donal Gallagher and a last gasp point from the boot of Cian McMenamin bringing Donegal level.

Donegal began well with Karl Joseph Molloy accurate from early frees while their resolute defence was effective in denying Tyrone any grip on the game.

Red Hands scores via Michael McElhatton and Eoin McElholm did nudge them into a brief lead, but Molloy and Cian McGee responded for Donegal hand them a slender 0-5 to 0-4 advantage at the break.

After the break Donegal continued to be disciplined and stern in defence, and  a Mark McDevit brace helped push them into a three point lead.

It looked as though they would keep their composure to see out the win but for Tyrone mounting a charge with 10 minutes remaining. The introduction of Sean Hughes was influential in hauling back the deficit, and right at the death captain McElholm landed a sensational score to leave it 0-8 each and ensure extra-time.

Tyrone picked up where they left off in regulation time, and they looked home and hosed after Noah Grimes and Niall McCarney points gave them a four-point lead. But more drama was in store as Gallagher’s goal and McMenamin’s nerveless ’45 sent the game to penalties.

The Tyrone lads were able to hold their nerve from the spot however, converting four of their five kicks, while Conor McAneney saved the deciding Donegal penalty to give Tyrone victory and passage to the final.

They will play Derry in the decider after they claimed a 0-16 to 0-11 win over Cavan in the Athletic Grounds in Armagh.

Saturday’s five-point victory made it six Ulster Minor Finals in eight years for Derry who had to withstand a late Breffni fightback following a black card for keeper Ben O’Connor.

Despite being down captain Ryan McNichoill due to injury, Derry started the game on the front foot and quickly took control of the game to build up a 0-12 to 0-4 half-time lead.

Martin Boyle’s team were two points up inside five minutes through Eoin Higgins and Cahir Spiers, and while Cavan sweeper Oliver McChrystal came forward to get his side on the scoreboard seven minutes in, it remained one way traffic.

Dara McPeake teed up Higgins for an excellent second point before Johnny McGuckian made it 0-4 to 0-1 by the 10th minute. The impressive Matthew Smith grabbed Cavan’s second point but Derry replied immediately through Conal Higgins, and they pushed on as points from Ruairi Forbes (2), Chambers (3), McGuckian and Eoin Higgins extended the midway margin to eight.

The impressive Forbes fisted the opening score of the second half but Derry would then go 13 minutes without registering as Cavan began to build a head of steam, Lorcan Reilly and Micheal Smith points bringing it back to 0-13 to 0-6 in the 38th minute.

Chambers grabbed a score on the run but that 45th minute point would be Derry’s last score until Crozier’s superb injury time ’45’, and in the meantime Cavan had asked some real questions.

Derry goalie O’Connor succumbed to a black card dismissal, and three successive Cavan scores brought it to a four-point game, but that would be as close as it got.

Derry settled, and Crozier’s ’45’ took the wind out of Cavan sails and ensured Derry’s double date with Clones.