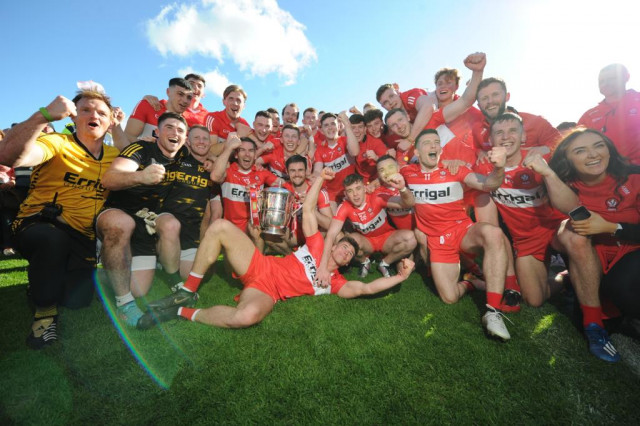 Derry ended a 24-year wait for an Ulster title with a momentous win over Donegal in a booming Clones yesterday.

In the first Ulster SFC Final to go to extra-time, it went right to the end when Derry blockaded their goal line to deny a Michael Murphy 14 yard free, and Sean Hurson’s final whistle moments later signalled Oak Leaf euphoria.

Niall Loughlin’s early goal on eleven minutes sent them on their way to building an early lead, with both teams tentatively shuffling about possession up to that point. Donegal were not as assertive in pressing forward for scores, and it was mainly the energetic Peader Mogan who helped make any meaningful inroads into the Derry defence.

Rory Gallagher’s men carried that goal cushion into the second half, 1-6 to 0-6, but it vanished minutes after the restart as Odhran McFadden-Ferry applied the finish to the net after Derry goalkeeper Odhran Lynch parried away a Michael Langan effort.

The flow of the game oscillated wildly after that, but Derry finished the better of the sides with six of the last nine scores with Shane McGuigan coming to the fore.

The tension in St Tiernach’s Park rose with each passing minute towards the end of regulation time, and with the teams locked level and another gripping stage of play to come, the conditioning of either team would become a huge factor after an exhausting hour of contestation.

Derry outscored Donegal 0-4 to 0-2 in extra-time, with imperious full-back Brendan Rogers scoring his third of the afternoon, then leading the way for Conor Glass to gallop through and kick the last point of the game, sealing Derry’s triumph.