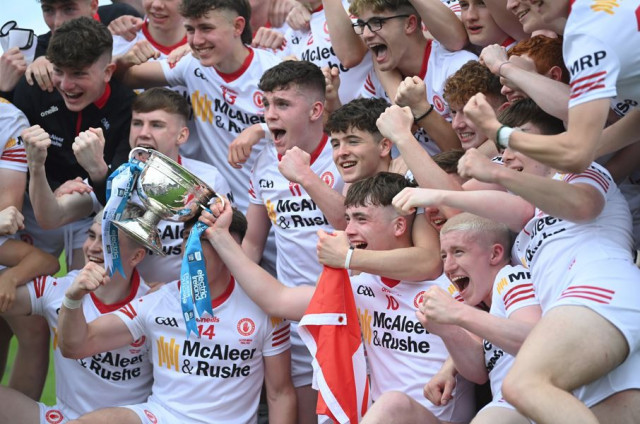 Tyrone retained the Electric Ireland Ulster Minor Football Championship title on Sunday afternoon thanks to a 4-08 to 0-16 win over Derry in Clones.

Goals were key to the Red Hands’ victory, with Ronan Molloy, Caolan Donnelly and captain Eoin McElholm (2) finding the net at critical times to gave Gerard Donnelly’s side claim victory.

They were all needed to see off a spirited and determined Derry performance, who refused to be set back.

Odhran Murphy in space 25 metres out and he cushioned it between the posts.

The teams shared the opening four scores before McElholm cracked in his first goal on 14 minutes, arrowing in a shot to the bottom right corner of the net, with Derry goalie Ben O’Connor helpless to stop it.

The second major came soon after when Conan Devlin’s effort from a tight angle rattled off the crossbar, and Molloy was on hand to fire home the rebound to put five between the teams.

Eoin Higgins was proving to be on form from dead ball for the young Oakleafers though, and he helped steady the ship as Tyrone went in with a four-point advantage at the interval.

Derry came out for the second period brimming with intent, and they rattled off a slew of scores through Cahair Spiers, Eoin Higgins, Odhran Murphy and Shea Birt to go level.

Michael McElhatton nudged Tyrone back in front with two scores in a row,  before they found the net for a third time on 43 minutes when Noah Grimes and McElhatton combined for Caolan Donnelly to smash home.

A Birt shot struck the base of the post nearly produced the perfect response for Derry, though McGuckian was able to curl over an impressive point from the rebound before two Higgins frees put the bare minimum between the teams again at 3-6 to 0-14.

The scoring action continued to swing back and forth in the final ten minutes, with some last ditch defending from  Tyrone required to protect their goal line.

But as was the case throughout a pulsating hour of football between tow great teams, Tyrone were able to strike the hammer blow once more as McElholm netted in injury time to ensure the Fr Murray trophy would remain in the O’Neill County.