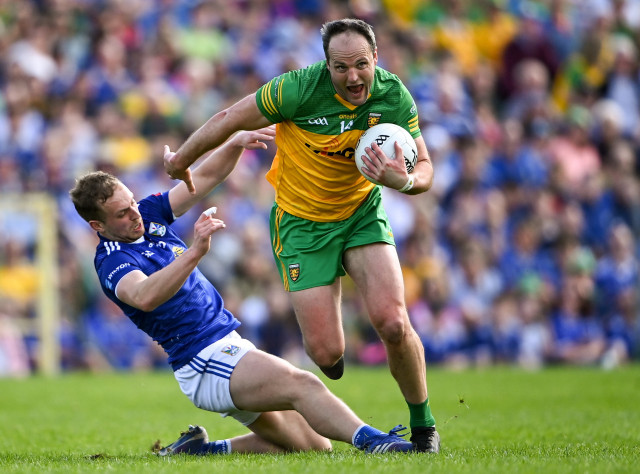 Donegal will take their place in their tenth Ulster SFC final in 12 years after overcoming a confident Cavan at Clones on Saturday.

The Breffnimen started the game on the front foot in what was a pulsating first half, but the teams went in level at 0-9 apiece. Two goals second half goals, from Caolan Ward then Paddy McBrearty, however put Donegal in the driving seat in the final quarter.

Paddy Lynch was in majestic form for Cavan in the opening 20 minutes, while his Crosserlough clubmate James Smith was also having a big influence, registering a couple of points and nearly hitting the net only for his effort to cannon off the crossbar.

Donegal were not firing on all cylinders in the opening period, but Jamie Brennan kept them in touch while Michael Murphy was ever-reliable with scores from placed balls.

Into the second half, the game continued to ebb and flow. Donegal opened up a three-point lead but Cavan came bounding back, Gearoid McKiernan hitting three points in succession.

It would take a goal to swing the momentum, and it fell the way of Declan Bonner’s men midway through the half. A high ball was parried into the path of sub Caolan Ward, who reacted well to sidefoot the ball home.

Cavan couldn’t muster another burst of energy, and the game was sealed when another opportunistic high ball into the Cavan box landed into the hands of McBrearty, who buried the ball into the net.

Ultimately it was Donegal’s experience that delivered the result despite a praiseworthy Cavan showing, and now they await the winners of Sunday’s contest between Derry and Monaghan.