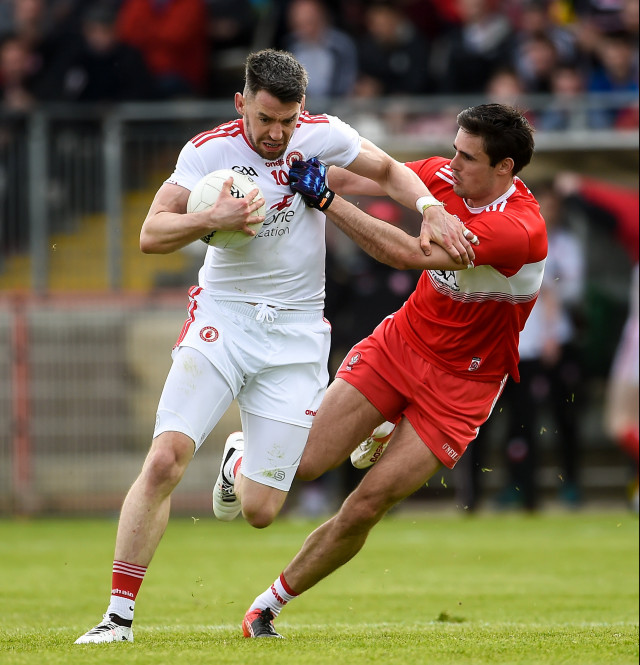 Tyrone were pushed all the way by underdogs Derry before securing a six point victory thanks to a late goal from Darren McCurry.

With only ten minutes remaining, Derry had hit the front thanks to Shane McGuigan’s expert finish and points from Conor McAtamney and Christopher Bradley. McCurry’s classy finish to the bottom corner was just what Tyrone needed to restore their advantage as they pulled away late on. Cathal McShane top scored for the Red Hands with seven points.

Derry started with seven Slaughtneil players in their side, and caused Tyrone all sorts of bother throughout. Despite a strong start from Tyrone, leading 0-6 to 0-1 after the first quarter, Derry had reduced the gap to three at the break. With Enda Lynn and Ciaran McFaul to the fore, Derry refused to go away, and when they struck the front with nine minutes remaining, an upset was on the card. Until McCurry stepped up. 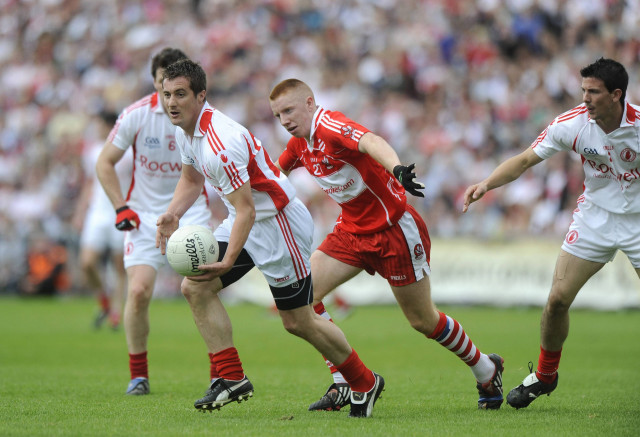 All-Ireland champions Tyrone cruised through to another Ulster Final as they comfortably seen off the Derry challenge at Casement Park.

The build-up to the game was highly anticipated as these two near neighbours went to toe-to-toe. But in the end, Derry produced a tame performance that never troubled the Red Hands. Tommy McGuigan grabbed Tyrone’s first three points of the afternoon as the Ardboe man top scored for Tyrone.

Derry were relying on Eoin Bradley placed balls to keep them in the contest, with brother Paddy being well shackled by Justin McMahon. Captain Brian Dooher scored a trademark wonder point on his introduction midway through the second half, as Sean Cavanagh and Brian McGuigan rounded off the scoring. 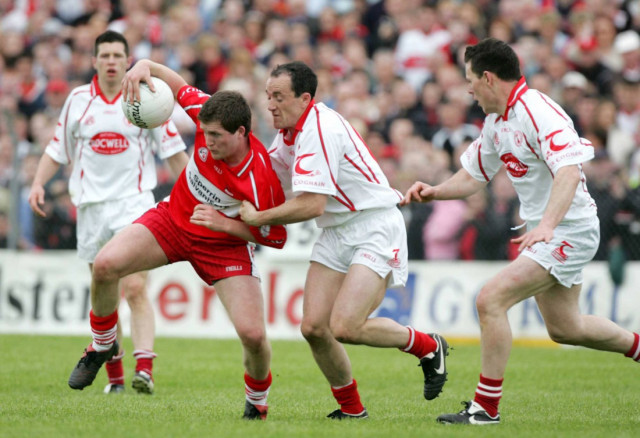 Derry sent reigning All-Ireland champions Tyrone crashing out of the Ulster Championship with a dominant performance at Healy Park.

Without the attacking talents of Peter Canavan, Stephen O’Neill and Brian McGuigan, Tyrone looked a pale shadow of the side who had claimed a second All-Ireland title just months previous. And when midfielder Kevin Hughes was shown a straight red card after only 17 minutes, their day went from bad to worse.

Credit must go to the Oak Leafers, who had Enda Muldoon, Barry McGoldrick and captain Johnny McBride in fine form. They led by 0-6 to no score at the break, forcing Tyrone into multiple fouls and umpteen turnovers. And even when Joe McMahon and Davy Harte eventually got Tyrone on the scoreboard, a Muldoon goal midway through the half sealed their fate.