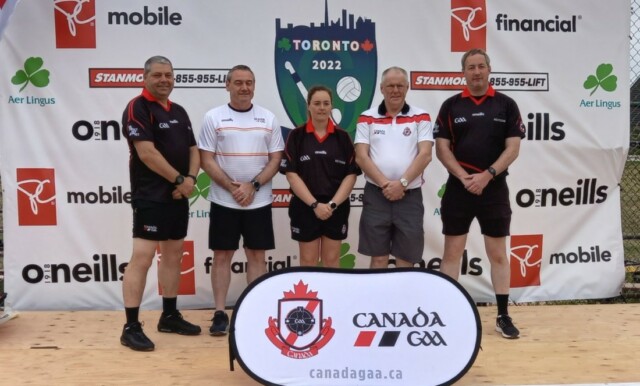 All three were involved in the Quarter-Final and Semi-Final stages before being on duty on Finals’ Day.

Derry dual referee Alan Nash took charge of both the senior and intermediate hurling finals. Donegal’s Siobhan Coyle was in the middle for the Junior Ladies’ final, while Sean Laverty of Antrim officiating at the senior men’s final.

Teams from right across Canada participated in two days of exciting football, hurling, ladies’ football and camogie action at the home of the GAA in Toronto, Centennial Park.

Ulster GAA are twinned with Canada and Britain, and these relationships have strengthened in recent years with Ulster GAA strongly supporting our partners in the area of refereeing.

This weekend, Armagh official Kevin Faloon will travel over to Glasgow to take charge of the Scottish Senior Football Final.  On the same weekend, three football referees and one hurling referee will represent Ulster GAA at the All Britain Competition games in Greenford, London.