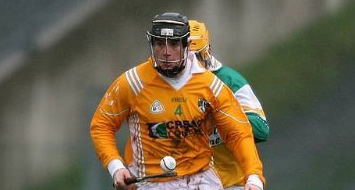 Déise get League defence back on track

Waterford ran out easy winners against Antrim at Dungarvan this afternoon in Division 1A of the National Hurling League.

Antrim lost the toss and it proved very costly as the Déise got off to a fantastic start.

The Munster side scored five unanswered points through Declan Prendergast, Dan Shanahan, Ken McGrath (2) and Eoin Kelly, before Dan Shanahan netted the first goal of the game after ten minutes.

A young Antrim team looked disheartened early on and things were only to get worse for the Saffrons as the hosts continued to dominate.

Ken McGrath back in action for Waterford scored a further two points, and captain Michael Walsh and Eoin Kelly kept the scoreboard ticking over.

Brendan Quinn opened the Saffrons’ account in the 14th minute and they grew in confidence thereafter.

Two points from Liam Watson gave them further encouragement, before a Simon MacRory goal gave Antrim real hope of producing another shock, following on from their victory over Wexford in the last round.

But that hope was quickly dashed as a relentless Waterford showed little mercy to their Ulster opponents. Walsh, Kelly (2), both Seamus and Declan Prendergast, and substitute Eoin McGrath were all on target.

Then Shanahan reminded the crowd just why he was named hurler of the year in 2007 by scoring his second goal of the game, to put Waterford 2-18 to 1-5 ahead.

The league champions took the foot of the gas somewhat in the second half, but not before Eoin Kelly scored their third goal from a 21 metre free to take his personal tally to 1-6. With ten minutes left in the game, Waterford led by 3-26 to 2-9.

Antrim showed great spirit in the closing stages and two further goals from Karl Stewart and Paddy Richmond gave the scoreboard a sense of respectability. However the Déise coasted home with a final scoreline of Waterford 3-29 Antrim 3-10.

There was plenty of hurling on display in Divisions Two, Three and Four of the National Hurling League on Sunday.

In Division Three, Tyrone and Longford had to sit it out as their match in Omagh was postponed.

In Division Four, Fermanagh beat Cavan 2-12 to 1-8 at Tempo. South Down recorded a facile victory over Leitrim at Newry, winning by a scoreline of 4-15 to 1-9.