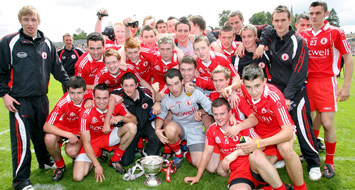 Kyle Coney opened the scoring for Tyrone, but Monaghan replied with points from Mark Connolly to take the lead for the first and only time.

The Red Hands responded well, and a series of scores left them with a 0-6 to 0-4 lead at half-time.

The second half saw a brief resurgence from the Farney Men, and 2 points from Kieran Hughes and Kieran Duffy leveled the match, before Tyrone pointed four in a row.

The otherwise excellent Coney had a penalty saved with 5 minutes remaining, but Tyrone held on for a 3 point victory.