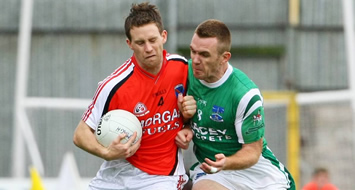 Armagh and Fermanagh will meet in the Ulster SFC final replay next Sunday, after the Erne men battled back heroically from eight points behind to force a draw.

The Lakelanders ran a flagging Armagh side ragged in a dramatic second half, but didn’t get the equaliser until deep into stoppage time when substitute Sean Doherty hit the target.

But for the brilliant Steven McDonnell, who scored six points, Armagh would surely have been planning for the qualifers, but they somehow survived, and the sides will meet again, back at Clones next Sunday (3pm).

Fermanagh led at the end of the opening quarter, after wing back Tommy McElroy and Ryan Keenan, from a free, were on target.

But there were signs of the threat carried by the Armagh attack, and they almost had a goal when Paul McGrane turned over possession in midfield, and got on the end of the move involving Stephen Kernan and Brian Mallon to fire in a shot, which Ronan Gallagher kept out.

They began to reap the reward for their measured approach when Steven McDonnell thumped over two exquisite points from play, and when midfielder Kieran Toner added a point, they led by 0-4 to 0-2.

The Orchard struck for a goal in the 28th minute, their ability to hold possession paying dividends when Brian Mallon turned the ball inside for corner back Finian Moriarity to arrive and beat Gallagher with a low shot.

To their credit, Fermanagh did respond with scores from Ciaran McElroy and Mark Little, but they were becoming increasingly frustrated by Armagh’s blanket defence, and when McDonnell added his third score, this time from a free, the Orchard led by 1-5 to 0-4 at the break.

Fermanagh needed to start the second half well, but they were rocked by a second Armagh goal less than a minute after the restart, Bran Mallon cutting the ball back for Ronan Clarke to drill home for a seven point cushion.

But the Erne men, with Marty McGrath playing a heroic role, responded with a goal, McGrath crossing from the left for Eamon Maguire to punch past Paul Hearty at the far post.

Fermanagh forced countless turnovers and picked up an immense amount of loose ball, gradually chipping away at the deficit with points from Eamon McElroy, Shane McDermott and McGrath.

McDonnell hit a couple on the breakaway to ease the pressure, but Fermanagh just kept on pushing, and hit the game’s final three points.