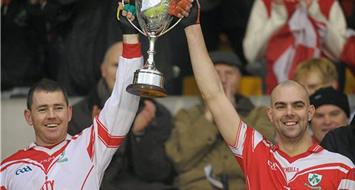 Loughgiel retained the Ulster senior club hurling title with a comfortable victory over Down champions Ballycran in Sunday’s decider at a rain-lashed Casement Park.

Ballycran had the wind advantage in the first half but they failed to make it count and Antrim champions Loughgiel led 0-8 to 0-5 at the break.

Ballycran had stayed in touch with Loughgiel in the first half but that all changed on the restart.

Eddie McCloskey scored Loughgiel’s opening goal early in the second half with a dipping shot under the bar.

McCloskey’s goal was followed by two points from Joey Scullion and from here it was a stroll for the holders.

Loughgiel surged clear and James Campbell netted in injury-time to seal the victory.

Loughgiel go through to the All-Ireland club semi-finals, where they will play the winners of the Munster championship.

“To win two Ulster finals in a row is just great – Ballycran are a formidable team and the scoreline probably flatters us,” said Loughgiel captain Johnny Campbell.

“We had to concentrate on our own game and it worked out on the day.

“It is going to be a very tough task for us mo matter who wins the Munster title.”