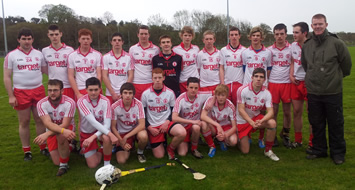 This week past hurlers from 4 schools in West Tyrone ventured into the unknown and participated as an amalgamated team in the Casement Cup, an u18 Ulster Colleges hurling competition for the first time ever.

This team is made up of players from Holy Cross College, Strabane, Sacred Heart College, Omagh, St Ciaran’s College, Ballygawley and Omagh CBS.

The players have been training together once a week in Omagh CBS from the start of September to take part in this initiative backed by the Schools, Tyrone County Board and Ulster Colleges.

On Tuesday 4th October the 4 weeks training was put to the test against St Colman’s from Co Down in a fiercely contested first game played in good conditions at Sherry Field in Armagh.  A good start to the competition and first win under the new teams belt. West Tyrone 3-7 to St Colman’s 0-11.

West Tyrone ventured south to Clonmore GAC in Armagh for the second of their round games in the Casement Cup. They faced La Salle from Belfast in this tie and it was sure to be a tough encounter.

The weather did not lend itself to hurling as the winds blew strong from one end of the pitch.  The game finished West Tyrone 3-6 La Salle 4-12.

West Tyrone, due to the win in game 1 progressed to the Quarter Final stage of the competition the week of 10th October were they faced Antrim side St Louis of Ballymena.

In a tough encounter at Swatragh GAC in South Derry the Tyrone outfit put the first point on the board.

St Louis’ responded well and very quickly to notch notch up 1-2 before West Tyrone got another 2 point on the scoreboard.

The Antrim side took control of the game after 25 minutes and really put it up to the Tyrone lads for the remainder of the half.  The Loughgiel youngster Dan McCloskey lead the way for the Antrim outfit.

However, for the amount of possession the score board only read St Louis’ 2-7, West Tyrone 1-4 going in at the break.

The second half got underway with a goal chance for St Louis only for the Tyrone keeper, Tiernan Cox to save well and push out for a 65 which was duly converted.

Gerard Gilmore got to grips with McCloskey and held him from doing anymore damage. However the Louis’ side stepped it up for the 10minutes at the start of the half and converted 4 points and hit the net twice in that time with only a 1-3 return from the Tyrone side.

Heading into the last 10 minutes the lads from Tyrone took the game to the Antrim side and hit the net again and piled on the pressure in the closing minutes but the St Louis’ outfit had done enough and the game finished on a scoreline of St Louis’s 5-12 to 3-7.

A great effort was given by the lads who deserve credit for committing themselves to this competition and maybe next year we can go one better.