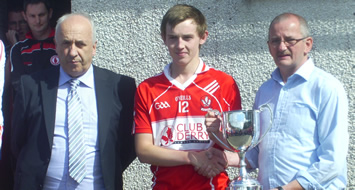 The inaugural Jim McGuigan Cup (u17 football) was played at Glen on Saturday afternoon with the home side emerging victorious.

In the semi final, despite a poor opening half, the young Oak Leafers finished strongly against a fancied Tyrone side running out winners on a scoreline of 2-11 to 1-09.

With Cavan netting a last minute goal to overcome Down it was the Breffni men who would face Derry in the final.

Cavan opened brightly and led by 2-00 to 0-00 after 10mins. However Derry responded well with a goal and two points without replay against a stiff breeze. Further Cavan points gave the blues a four point cushion at half time.

With the wind in their backs for the second half, Derry fought hard eventually levelling with 15mins remaining. A final surge from the home saw the McGuigan Cup fittingly stay in Derry for its first outing on a scoreline of Derry 1-11 Cavan 2-04.

Thanks and congratulations is due to Watty Grahams Glen for superbly hosting what was a highly enjoyable and entertaining tournament in memory of a great Derry and Ulster gael.