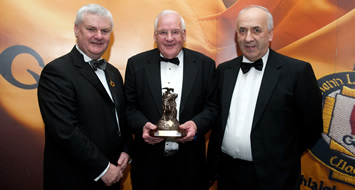 Over 200 guests packed into the Armagh City Hotel on Friday 30th November for the third Ulster GAA President’s Awards.

2012 was once again a successful year for Ulster GAA with teams and players from our Province achieving All Ireland success in every GAA code. There was also had significant achievements in Scór and other off-field activities.

The Ulster GAA President’s Awards recognise the players, administrators, coaches, officials, referees and team managements for the significant contribution they make to the GAA at all levels.

Commentating at the ceremony, Uachtarán Chomhairle Uladh, Aogán Ó Fearghail said: “Our volunteers are the lifeblood of the GAA and are the very heartbeat of our communities. Tonight’s winners represent the many more who also carry on this valuable work across our nine Ulster Counties. I thank sincerely all who work for the GAA in our Province. Míle buíochas daoibh go léir. Ní neart go cur le chéile.”

Below is the full list of those who collected awards: