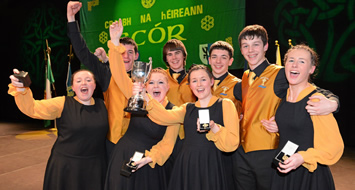 Comhghairdeas to contae Mhuineacháin who took the honours in Ceol Uirlise with Droim Shamhain and the recitation which was performed to the highest standard by Colm Kirke from Cluain Eois. One adjudicator who is an accomplished musician and former Ulster champion commented that she would not like to be in competition with any of the instrumental groups who took part in this year’s All Ireland final of Scór na nÓg and that is possibly the greatest testament to the quality of the Droim Shamhain instrumental group. An Ghleann from Contae an Dúin kept the flag flying in Tráth na gCeisteanna and great credit is due to them for winning what turned out to be a very entertaining competition. The last act of the day was Crois ar Loch (pictured) and it was just great to see them win at the seventh time of asking. Crois ar Loch showed that the old saying is true “IF AT FIRST YOU DON’T SUCCEED, TRY AND TRY AGAIN”.

There were four other acts representing Ulster also (An Chrois Bhán – Rince Foirne, Emily Shields, An Mullach Bán – Amhránaíocht Aonair, Coileach Eanach – Nuachleas and Gaoth Dobhair – Baileád Ghrúpa) and unfortunately for them, they came up against stiff competition on the day. All of them represented Ulster at the highest level and some must have been very close to increasing the Ulster haul of medals.

The Scór Sinsear Uladh competition will begin on Saturday 2nd March at 7pm in Threemilehouse, County Monaghan, and will be contested by the Armagh, Cavan and Monaghan representatives.

The second semi final will take place on Friday 8th March (8pm) in the Parish Centre in Banbridge and will feature Antrim, Derry and Down clubs.