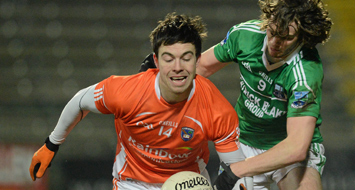 Armagh claimed a deserved 2-10 to 0-09 victory under the lights at Brewster Park against Fermanagh in the Cadbury Ulster GAA U21 Football Championship Preliminary Round.

The Erne men had started well with Conor McAleer a lively presence in the attack, McAleer knocking over two points as Fermanagh led 0-3 to 0-2 after 17 minutes.

However, Armagh got a grip on the contest in a ten minute spell before half time and five unasnwered points from Niall McConville (3), Ethan Rafferty and the impressive Jemar Hall helped them into a 0-7 to 0-4 half time lead.

Armagh increased their lead early in the second half as Rafferty fired a soccer style shot to the back of Brian McAleer’s net to make it a six point game.

Fermanagh did reply with frees from Eddie Courtney and Ryan Lyons but it was game over when Hall slotted to the net to make it 2-07 to 0-06.

Fermanagh did continue to battle away but Armagh always remained in control as they ran out 2-10 to 0-09 winners.

Armagh will now take on neighbours Down in the Quarter Final next Wednesday 20th March at the Athletic Grounds.