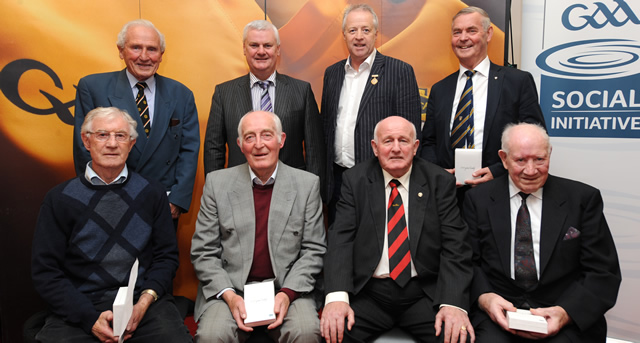 Over 120 people were in attendance at the Tyrone GAA centre on Wednesday 18th September as Ulster GAA took a trip down memory lane when they remembered the breakthrough era for various Ulster counties in the fifties, sixties and seventies.

The highlight of the evening was the screening of the earliest-known colour video footage from the Ulster Football Championship, 1950 Ulster Final between Armagh and Cavan in Clones.

Other material screened on the evening included the 1952 Ulster final, between Cavan and Monaghan. This and the 1950 final footage are among a collection of remarkably clear colour films taken by the late Canon Terry Kirke, former parish priest of Tydavnet, using a cine camera. Until now these major finals had not been identified or shown in public.

Special guests on the evening who could be seen playing in the some of the footage were Cavan’s Johnny Cusack, Derry’s Jim McKeever, Tyrone’s Jody O’Neill, Armagh’s Dr Pat O’Neill, Down’s Paddy Doherty and Donegal’s Brian McEniff, all of whom reminisced on their counties’ successes on the provincial stage.

The event, which was run as an Ulster provincial occasion to promote the GAA Social Initiative to engage older members of the association, also featured film of Down’s All-Ireland successes of the 1960s, and Donegal’s landmark Ulster Championship triumph of 1972.

Any club looking to become involved with the GAA Social Initiative should contact fionntan.odowd.ulster@gaa.ie for more information.