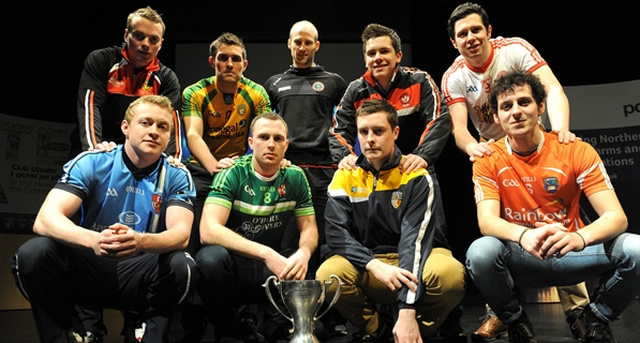 Ulster GAA in partnership with Power NI, have launched the 2014 Power NI Dr McKenna Cup in the MAC in Belfast.

Speaking at the Launch Ulster GAA President Martin McAviney said,“The 2014 Power NI Dr McKenna Cup is sure to brighten up the winter months for Gaels across Ulster.  The competition begins on Sunday 5th January and is tipped to see some great battles and will hopefully identify some new upcoming players for the counties and Universities.

“We are delighted to have Power NI on board once again for this flagship winter competition.”

Promoting the Competition Ticket Ulster GAA President Martin McAviney said, “This will make the perfect Christmas Gift for any dedicated Gael and I urge people to order their ticket without delay as the deadline for guaranteed Christmas delivery is 13th December.”

The Competition Ticket is available online at gaa.tickets.ie and for more information log onto www.ulster.gaa.ie/mckennacup2014

All Sunday games at 2.00pm: All midweek games at 7.30pm
(Extra time to be played in Semi-finals & Final)