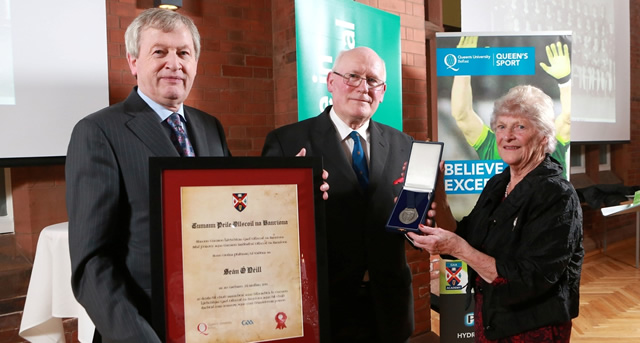 Gaelic Football legend Sean O’Neill was honoured by his alma mater on Saturday evening with the presentation of the inaugural Paddy O’Hara Medal of Honour.  Queen’s University GAA hosted a special dinner at the magnificent Riddel Hall in Belfast for their greatest ever player and former team-mates, colleagues and friends from the university, Down, Ulster and beyond gathered for an evening to remember for O’Neill and his family.

The Medal of Honour was presented by the late Paddy O’Hara’s wife Eileen and the GAA Ard Stiurthóir Paraic Duffy.  Dr Maurice Hayes delivered the citation and the evening concluded with an address by former Ulster GAA President Aogán Ó Fearghail.

The event was hosted by the Queen’s GAA Past Members’ Union.  This new award has been commissioned to honour the name of the late Paddy O’Hara who guided Queen’s to their first Sigerson Cup triumph in 1958.

In accepting the honour, Sean O’Neill paid tribute to the man whose name will now be permanently associated with this distinguished award.  “Paddy O’Hara was a unique figure who made a significant contribution to Queen’s.  While I appreciate that the name of the recipient may be important, for me the man whose name is inscribed on the medal is what makes this honour so special.”

“I want to thank the Past Members Union and the club for the work they have done to make this a very special evening for me and my family.”

Among the guests were members of the 1958, 1964 and 1982 Sigerson Cup teams, members of the O’Hara family, former colleagues from the Down team of the sixties, Derry legend Jim McKeever and a host of famous GAA names including Peter Quinn, Greg Blaney, Feargal Logan, Dessie Ryan and Enda McNulty.

Sean O’Neill is regarded as one of the greatest Gaelic Footballers.  He won two Sigerson Cup medals in 1958 and 1964 and was manager of the successful side of 1982.  He also won three All-Ireland titles and 8 Ulster medals with Down, a record 8 Railway Cups with Ulster and was named on the GAA Team of the Millennium.  He was Footballer of the Year in 1968 and was also named as the Ulster Footballer of the Millennium in 2000.

With this award, Sean has become the first inductee in the QUB GFC Hall of Fame.

Paddy O’Hara coached QUB teams for almost twenty years and led the Combined Universities side to the 1973 Railway Cup.  The Antrim man was an honorary Vice-President of the Queen’s club until his passing in 2008 and was the founding Chairman of the Past Members’ Union in 1990.

John Devaney, QUB GAA PMU Chairman, said that “Sean O’Neill represented the very best of Gaelic Football and the very best of Queen’s Sport.  His place in GAA history was cemented with his achievements and exploits on the field of play, but this award is also for his service and commitment over many years to an institute and a club that has remained very dear to him over 55 years”.

Mr Devaney added that “this is the first time that the Medal of Honour has been presented and with the close connections between Sean and Paddy O’Hara, it seems more than appropriate that we should honour our most celebrated past player.  We hope that he will continue to inspire the present generation of Queen’s players as his name has been so closely associated with the club and university for many years”.

The event also marked the beginning of a few very busy months for Queen’s, as they will become the first university to host the four main GAA intervarsities championships (Sigerson, Fitzgibbon, Ashbourne and O’Connor Cups) in February and March.  The overall event will be promoted as the GAA2014 Festival and was formally launched last week in Croke Park.  The Festival will host the final weekends for all four codes at the splendid university facilities at Malone in Belfast.

GAA Officer Aidan O’Rourke acknowledged the role that Sean O’Neill and Paddy O’Hara played in developing the GAA at Queen’s and in building the reputation of the university.  “We are only able to take on a challenge like the GAA Festival because we have a strong record as a good host and we have all the necessary resources to do so successfully.  Queen’s have invested heavily in sport over the past few years, but we also have to recognise that most GAA people associate the university with the distinguished record and service of Paddy and Sean.  They are the legendary figures that each new group of students look up to and we hope that we can uphold that reputation in the Spring.”