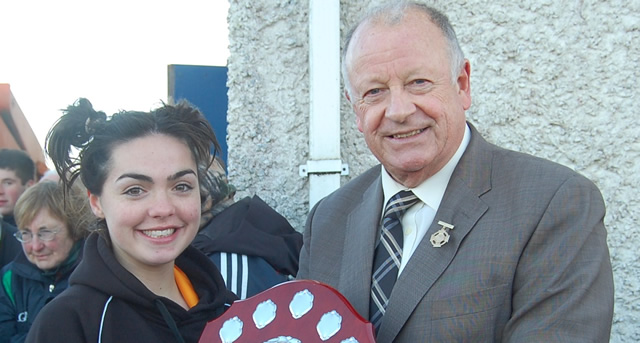 A first half hatrick from Grainne Rafferty was the foundation for victory in the Inter provincials schools shield final held in Mullingar at the end of last month.

Ulster suffered a severe blow before the competition started with the absence through injury of full back Karen Ward, midfielders Shannon Mc Grody and Niamh O Neill and forward Mairead Kavanagh. Despite this they showed great heart and determination to reach the shield final were they met reigning champions Munster.

The Ulster girls were up for the final and with their first attack forced a 45m kick. From this kick Amber Barrett found Niamh Callan who calmly slotted over for the opening score. From then until half time it became the Grainne Rafferty show. With Muireann Atkinson and Niamh Coleman pulling the strings at midfield Ulster attackers were getting loads of chances and Rafferty who plays her football with St. Ciarans, Ballygawley netted three times and also fired a point to help Ulster to a 3-2 to 0-0 interval lead.

Munster came out all guns blazing in the second half but the Ulster defence with Louise Kenny in charge stood firm and the girls from the south only managed to score three points. Ulster on the other hand continued to dominate. Amber Barrett contributed 1-5 and Niamh Callan also found the net to help Ulster to a deserving 5-7 to 0-3 win.

The management team of Sheena Kelly, Gary Mallon, Gerry Doherty and Paul Swift were delighted with the performance in the final and the overall weekend contribution. Team Captain Rose Boyle who was playing in her third tournament received the shield from President Pat Quill and afterwards said, “We knew we didn’t do ourselves justice in the round robin stages and that we had a big performance in us. It’s brilliant that the girls showed what they are capable off and we will certainly enjoy the trip home”.

Well done to Ulster referee Brendan Rice who officiated at the tournament on behalf of the province. Pictures from the tournament are available on the Ulster Ladies Gaelic Facebook page.