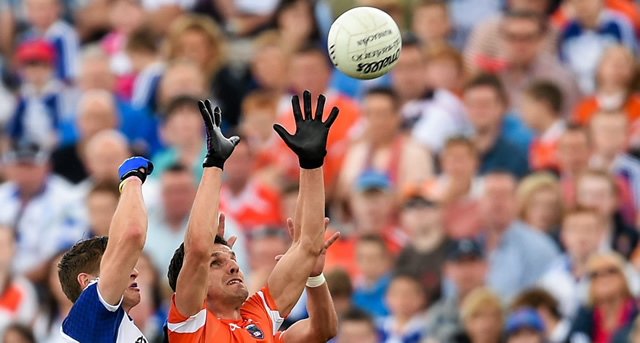 Throughout the 2014 Ulster Senior Championship, Ulster GAA will be compiling a report of the key statistics from each match. The reports will look at a range of factors contributing to game play, including possession breakdown, kick out success, possession to scores ratios and turnover stats.

The drawn game last week provided us with little insight into any underlying superiority that either team may have been able to exploit during the replay. Across all the key statistical parameters neither team were able to demonstrate any significant degree of dominance, making the tactical battle for the replay all the more interesting.

Last week, Monaghan dominated possession in the first half, while Armagh were dominant in the second half. Despite that, both halves finished level on the score board. This week Armagh enjoyed more possession in the first half (57.7%), but ended the half 4 points adrift, having only scored 1-4, to Monaghan’s 1-8. In the second half, Monaghan edged the battle with 50.4% possession, but only managed to add a single point to the differential, running out 1-18 to 1-13 victors.

Over the full match (Figure 2) Armagh enjoyed the majority of possession, with 53.5%, compared to 46.5 for Monaghan. On the basis that Armagh increased their share of possession from the first match, it may have been expected that they could take advantage of this and deliver a victory. However, yet again, this game has reinforced previous observations suggesting that dominance of possession is not vital to the outcome of the match. 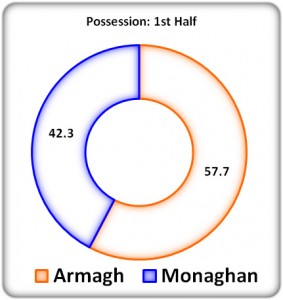 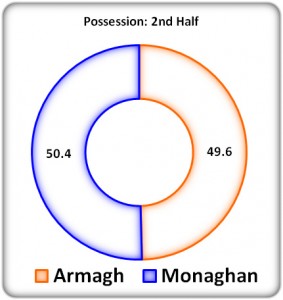 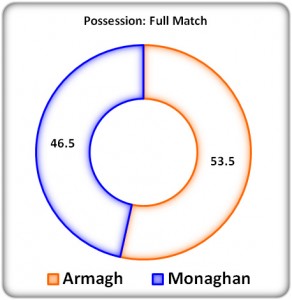 This match provided an excellent platform to analyse how and where Monaghan won this match, on the basis that both teams secured 50 possessions over the course of the match. Looking at figure 3, highlights that Monaghan were superior to Armagh in each stage of possession, converting more possessions to attacks (78% v 74%), more attacks to shots (92% v 76%) and more shots to scores (53% v 50%).

Obviously with an even number of possessions the likelihood is that the most effective team at generating scores will win the match. Monaghan’s possession to scores ratio in the replay was up to 38%, from 31% last week. This ratio is second only to Antrim’s performance versus Fermanagh in their Quarter final tie (39%). In contrast, Armagh’s ratio fell from 31% in the first match to 28% in the replay. The combination of Monaghan’s improvement, and Armagh’s regression evidently combined to result in a Monaghan victory.

Of particular note is Monaghan’s first half performance. Having generating 18 attacks from 24 possessions Monaghan were able to get a shot away with every single attack generated, taking 18 shots, from which they scored 9 times (Figure 4).

There was a suggestion following last week’s stats that Armagh had the opportunity to exploit this battle as they appeared to have the advantage when kick outs were contested. Last week both teams won 25 kick outs each, but Armagh allowed Monaghan 14 short, and essentially uncontested, kick outs.
Overall, it would appear that Armagh built upon this aspect of the match from last week, securing 59% of all kick outs (Figure 5). They had a particularly strong second half performance, winning 65% of the kick outs. Despite their superiority in this area, Armagh were ultimately unable to capitalise.

The volume of short kick outs was noticeably reduced, from a total of 25 last week to just 14 this week (Figure 6). Both teams clearly identified the volume of possession conceded in this manner as unacceptable following last week’s match. This week Armagh won 77% of their own kicks, compared to Monaghan’s 68% success rate from their own kicks. Of the 35 kicks contested kicks taken, Armagh won 24 (69%), compared to just 11 for Monaghan (31%). While Monaghan were victorious, they will undoubtedly pay attention to these statistics as an area that needs to be addressed ahead of the Ulster final.

Given that Armagh dominated the kick out statistics, yet Monaghan still managed to have the same number of possessions it is clear that Monaghan were able to secure a vast amount of possession by forcing Armagh into turnovers. In last week’s match, both teams coughed up possession 22 times. This week, Monaghan only lost possession on 17 occasions, while Armagh suffered the opposite fate, losing possession 27 times (Figure 7). In total, a swing of 10 possessions in Monaghan’s favour; enough to eclipse the 9 extra possessions Armagh gained through their kick out superiority.

As obvious in figure 7, Armagh were twice as expensive in their kick passing, losing a total of 12 possessions through wayward kick passing. They also wasted another 12 possessions split evenly between tackles and shots that came up short. Monaghan’s main concern will likely be the 5 unsuccessful shots that came up short or were blocked; a figure identical to that of the previous week. While Monaghan delivered an impressive 36 shots from 39 attacks (92%) this statistic would suggest that not all their shots taken were the correct decision, and may have been overly ambitious or under too much pressure.

In last week’s encounter, Monaghan were slightly more productive, 3.1 compared to 3.0 for Armagh. While Armagh improved to 3.2 this week, Monaghan improved by a much greater margin to 4.2. What this ultimately means is that for every 10 possessions each team secured, Monaghan scored one more point. Based upon the 50 possessions each, this translated to a 5 point victory for Monaghan.
Interestingly, Armagh were almost on a par with Monaghan in terms of productivity from shots taken, but they were significantly less effective at converting attacks to scores (4.3) than Monaghan (5.4).

Shot outcome stats will reveal a few areas for each team to address going forward. Monaghan may be slightly concerned by their 11 wides, albeit given the volume of shots they took this week it worked out at a similar percentage of shots wide as last week (32% last week compared to 31% this week). Armagh’s main area for concern will likely be in the lack of shots they got away compared to Monaghan. From 50 possessions each, Monaghan got 36 shots away, while Armagh only got 28 taken. They will also have to address the 5 shots that fell short, and perhaps review video footage to assess the reasons for these efforts falling short.

After the impossible task of separating the teams statistically last week, this week’s game provided a set of results which did throw up significant differences, albeit differences that may have been predictable. Armagh last week demonstrated superiority from contested kicks, suggesting they may try to limit Monaghan’s short kick out opportunities and exploit this advantage in order to secure more possessions. This is exactly what transpired, with Monaghan’s short kick outs reduced from 14 to 8, and Armagh subsequently winning 59% of kick out possession compared to a break even 50% last week.
Last week also highlighted that Monaghan only forced Armagh into 22 turnovers, having previously forced Tyrone into 30 in their quarter final clash. It was suggested that Monaghan may feel there was a greater degree of intensity that could be brought to the replay in order to increase this turnover count. This also transpired, with Monaghan forcing 5 extra turnovers, while also reducing their own count.

The combination of Armagh’s superiority from kick outs and Monaghan’s greater ability to force turnovers led to an even balance of possession count, with both teams winning 50 possessions.
This provided a simple analysis process. From 50 possessions Monaghan were able to generate more attacks, create more shots and take more scores.

Ahead of the Ulster final versus Donegal Monaghan will have a few areas they will no doubt be keen to improve. Based on both semi final performances a key area for attention will be their ability to win kick out possession, in particular when the kicks are contested. Monaghan have a preference for using the short kick out from their own kick, and this effectively ensures that they win the majority of their own kicks. However, it also appears that if the opposition applies pressure and limits the availability of the short kick out that Monaghan may struggle to win the majority of their own kicks.
In the original semi final Monaghan only forced 22 turnovers, compared to 27 in the replay. They will be eager to ensure they bring a high level of intensity to the Ulster final in order to pressurise Donegal into a higher number of turnovers.

Ahead of their All Ireland Qualifier meeting with Tyrone Armagh will be keen to build upon, what appears to be a consistent strength, in terms of winning possession from kick outs. In this game they were superior in this area, but all this positivity was undone by losing possession on 10 more occasions than Monaghan, with a total of 27 turnovers, 12 of which came as a result of kick passing. They will undoubtedly look to tighten up their kick passing ahead of the match versus Tyrone. It should be pointed out that to tighten up in this area does not necessarily mean reducing the volume of kick passing attempted. The Monaghan goal in this match was a perfect example of the value of long, accurate and direct kick passing, the ball travelling from the kick out to the net in a total of 12 seconds.