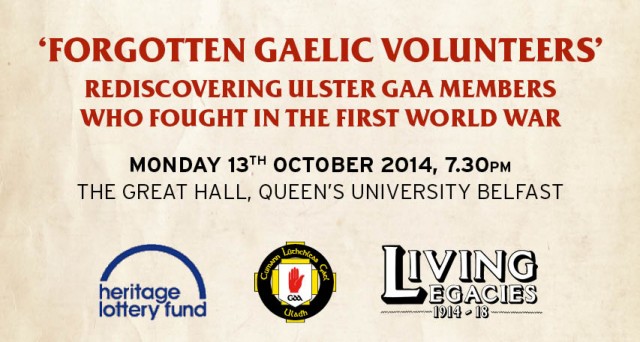 A unique event due to take place on Monday 13th October will launch the first-ever initiative to recognise the participation of GAA members in the First World War.

‘Forgotten Gaelic Volunteers’, a nine-month research project to be undertaken under the auspices of the Ulster Council, GAA, will be unveiled at the flagship occasion at the Great Hall, Queen’s University Belfast, on the evening of Monday 13 October.

The project has recently secured a grant from the Heritage Lottery Fund to promote research to identify as many as possible of the GAA members from Ulster who died in the war.

Until now, the widely documented participation of numerous GAA men in the Irish revolutionary movement in the 1913-21 has led to a general understanding that members of the association had no connection to the Great War.

Preliminary research has revealed that dozens of Gaelic players from Ulster joined regiments of the British army and fought in Europe between 1914 and 1918. The majority of those identified to date came from west Belfast, where recruitment among nationalists reached high levels, largely due to the scale of unemployment in the area.

These include the twenty members of one Belfast GAA club alone who signed up, most of whom ended up in the trenches. William Manning, a Belfast man who played for Antrim in the 1912 All-Ireland football final, was shot dead while serving as a lance-sergeant with the Royal Dublin Fusiliers in France in 1918.

Several club and county players who took part in Gaelic games in other parts of Ulster – including Tyrone, Derry, Cavan and north Antrim – have also emerged as participants in the war. Private Patrick Corey from Cookstown, who played for Tyrone in the 1909 Ulster Football Championship, died in the uniform of the Royal Inniskilling Fusiliers in 1915.

For several reasons, this subject has not been researched in depth previously. First of all, there is the longstanding reluctance among nationalists to discuss or detail memories of the war. Second, several of the GAA clubs affected by recruitment were in the junior leagues and no longer exist. Then there is the fact that most of the soldiers in question appeared to be in the lower ranks of their regiments, and therefore their military service or deaths were less likely to be recorded prominently.

The evening will open with welcome addresses from Ulster GAA President Martin McAviney and Chief Executive Officer Dr. Danny Murphy, and will close with a short contribution from GAA President-Elect Aogán Ó Fearghail. Representatives of the NI First World War Centenary Committee and the Queen’s-based ‘Living Legacies 1914-18’ project, which is facilitating the event, will also speak in introduction. Donal McAnallen, the Ulster GAA Cultural Education and Outreach officer, will then explain the basis and plans for the research project.

Martin McAviney Ulster GAA President commented on the significance of this event:
“As an organisation Ulster GAA have already placed on record its commitment to working with all sections of society to use the decade of commemoration as an opportunity to promote both reconciliation and peace building. The GAA as an organisation has a strong tradition of commemorating it past deceased members and it’s in that context that we use this event to reflect on members of the Association who were active or died during World War 1. The centenary of the Great War provides the GAA an opportunity to do this in partnership with the Heritage Lottery Fund and First World War Centenary Committee. The event also provides us with an opportunity to reflect on our shared history and reflect on how we can build a shared future.”

Paul Mullan, Head of the Heritage Lottery Fund NI, added their support for the project:
“HLF was pleased to fund this fascinating new project which will explore another strand of our complex heritage. Across the UK HLF has funded groups to uncover and record their unknown First World War stories. These projects are helping us to understand that different perceptions and interpretations of our past exist. Exploring and sharing these complex stories will broaden and deepen our collective understanding of the First World War.”

As part of the project, a couple of similar events will be held at provincial venues in the coming months, and the research findings will be published in a legacy booklet next year.

Any members of the public who have details of GAA players from Ulster who fought in the First World War, or who would like to attend the event on 13 October, is requested to contact the Ulster Council office at 028 (048) 3752 1900 / kathy.kelly.ulster@gaa.ie but please note places are limited.