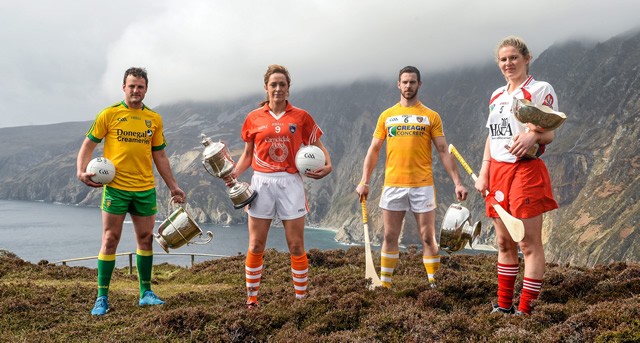 The Ulster Senior Football, Hurling, Ladies Football and Camogie Championships have been launched in Donegal Town on Wednesday evening.

The official launch was preceded by a photo call at the spectacular setting of Slieve League with each of the 2014 champions.

Speaking at the launch, Ulster GAA President Martin McAviney said:
“It is our pleasure to launch the 2015 Ulster Championships in the home of the reigning Ulster Senior Football Champions along with our colleagues from Ulster Ladies Gaelic and Ulster Camogie. This year, we are delighted to offer supporters discounts of up to 33% on match tickets via a special advance purchase rate and would urge our patrons to avail of this. As we all look forward to another exciting summer of Ulster Championship action, I would encourage all supporters to come out and get behind their teams – Be there, all the way!”

All games are ticketed games and patrons can obtain discounts of up to 33% by purchasing their tickets in advance of match day. Please note that tickets will only be available on match day if they have not already sold out. Tickets are available through county boards, selected store outlets and at gaa.tickets.ie