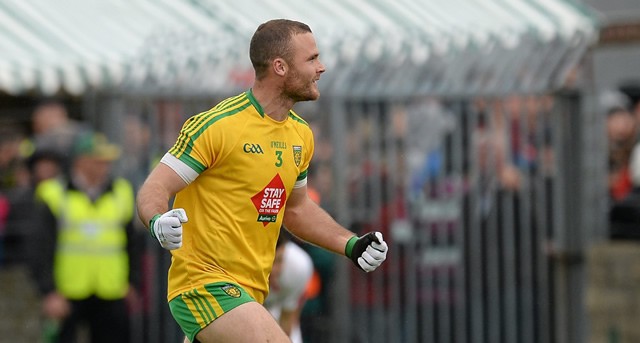 A strong finish from Michael Murphy edged an absorbing Ulster championship tie for Donegal against Tyrone on Sunday afternoon.

The game was a lot closer than many pundits had predicted and a hugely entertaining clash ebbed and flowed before Murphy nailed three dead balls into the wind to seal it for the defending provincial champions. The sides were level at 1-10 apiece after 51 minutes but Tyrone failed to score for the remainder of the game and both sides were reduced to 14 men late on with Neil Gallagher and Sean Cavanagh sent-off for second offences.

Tyrone had been written off after losing a league match by 10 points to the same opponents seven weeks ago, but they were much improved and pushed Donegal all the way. They had a couple of late goal chances, Colm Cavanagh’s flick coming off the crossbar and Paul Durcan saving brilliantly from Peter Harte, but must head into the All-Ireland qualifiers, with their reputations enhanced, while Donegal will face Armagh next in Ulster on June 14.

The home team scored the opening four points from play in the opening nine minutes. Frank McGlynn, Paddy McBrearty, Christy Toye and Martin McElhinney all scored from play in a dominant Donegal start.

Tyrone responded brilliantly with Darren McCurry’s well-taken goal in the tenth minute. Peter Harte broke through a couple of tackles and found McCurry rushing in unmarked on the far side. He bent the ball superbly around Paul Durcan with his left foot to reduce the deficit to 0-4 to 1-0.

Colm McFadden, a late inclusion in the Donegal starting line-up, scored from close range and McElhinney nailed his second of the day to steady Donegal after Tyrone’s goal. However Tyrone took complete control and outscored the home side by six points to one between the 20th and 33rd minute.

Justin McMahon, Mattie Donnelly and Ronan McNamee scored from play with Sean Cavanagh landing 0-3 (two from frees) to put Tyrone ahead 1-6 to 0-7. Although both sides packed defences, their speed on the counter-attack meant the scores flowed and the momentum shifted again with Donegal’s late 1-1 before the break.

McGlynn passed to Odhran MacNiallais and though his shot was smothered by goalkeeper Mickey O’Neill, the ball squirted loose and McElhinney pulled on the loose ball which flew into the net. McFadden tagged on an injury-time point to establish a 1-8 to 1-6 half-time lead for Donegal.

The teams were evenly matched in the third quarter and Conor McAlliskey hit three points from play to draw Tyrone level at 1-10 apiece. Facing into a strong breeze Michael Murphy, who had been well contained by Justin McMahon, made an impact late in the game with two long-range frees before converting a difficult ’45’ from near the sideline to push Donegal three points clear.

Neil Gallagher was sent off for a second yellow card on 63 minutes and Sean Cavanagh went three minutes from time for a high tackle on Paddy McGrath. He picked up a black card and having been booked earlier in the game, he received a red card from referee Joe McQuillan.

Mattie Donnelly’s low shot flew inches wide as Tyrone searched for an equalising goal but Donegal held on for a memorable win.