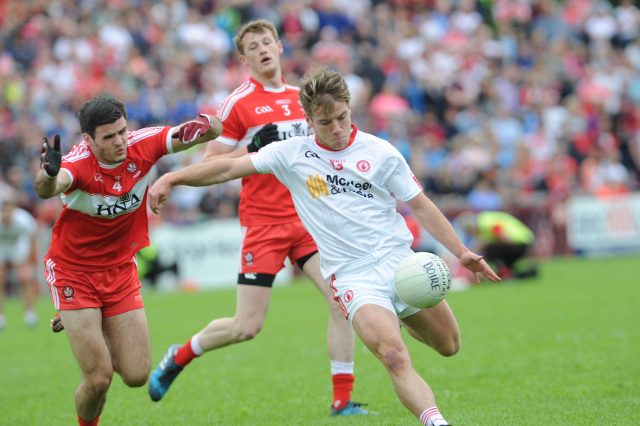 Sean Cavanagh top-scored with 0-7 as Tyrone eased to an 11-point Ulster Championship first round victory over Derry at Celtic Park.

It was the same margin of victory as last year’s corresponding fixture but perhaps this was a more encouraging win for Mickey Harte, who looks to have more depth to his squad than 12 months ago.

Their bench contributed seven points, six from play, while Conall McCann – considered a surprise starter in midfield – shone on his debut delivering a man of the match display.

Darren McCurry kicked three points from play with fellow sub Lee Brennan was twice on target off both feet. Derry, with so many players unavailable, were written off coming into the game and needed a good start to get the confidence flowing.

Instead it was Tyrone who got off to a flier with the first five points inside the opening 13 minutes.

Peter Harte, who was off target with his first two efforts into a difficult wind, slung over a fourth and livewire Mark Bradley got on the end of a classic Tyrone counter-attack to make it five.

After soaking up a period of Derry pressure, Niall Sludden slid in to win the turnover and in a flash Bradley slotted it over left-footed despite being off balance.

Derry at least went toe-to-toe with their north west rivals in the second quarter with both teams scoring five points each.

Niall Loughlin got their opening point with a 35m free in the 17th minute and followed it up a minute later with their first from play.

Tyrone were composed and never looked rattled. They stretched the lead out to 0-8 to 0-2 with Rory Brennan’s point after 21 minutes.

Ciaran McFaul scored from a tight angle before Danny Heavron, playing an inside role, came out to the ’45’ to sling over Derry’s best point with the outside of the boot.

Tiernan McCann replied for Tyrone before Cavanagh slotted over his fifth free of the opening half.

Tyrone headed to the dressing-rooms with a comfortable 0-10 to 0-5 lead.

The third quarter was easily the most competitive and for about 10 minutes there was a bite and intensity about the exchanges which was sadly lacking otherwise.

Niall Keenan and Heron also helped closed the gap to 0-11 to 0-8 and suddenly it was game on.

Unmarked Aidan McCrory ghosted through for the game’s only real goal chance after 47 minutes. His initial shot was saved by Ben McKinless before Niall Keenan blocked the rebound on the line.

There were a couple of flashpoints with Frank Burns correctly black-carded for tripping Keenan, while no action was taken after Mattie Donnelly clashed with Chrissy McKaigue off the ball.

Tyrone stretched their legs and pulled away.

They outscored the home side by 11 points to 3 in the closing 24 minutes. David Mulgrew, Conall McCann, Declan McClure and Colm Cavanagh all got on the scoresheet as Tyrone sailed through to an Ulster semi-final showdown with Donegal on June 18.