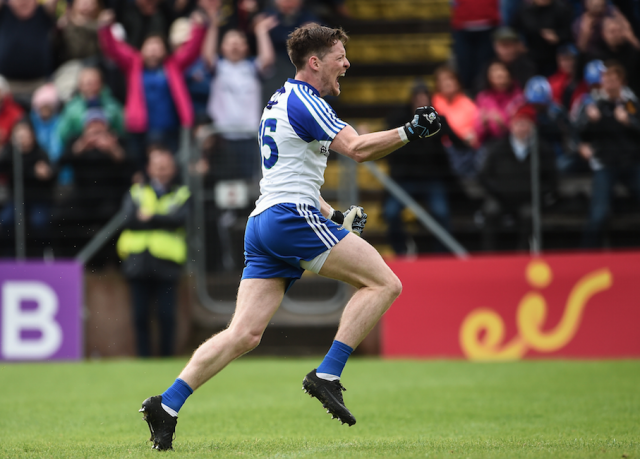 Monaghan and Cavan threw up a typically feisty and hard-fought local derby at Kingspan Breffni, with a 60th minute goal from Conor McManus all that separated the sides.

Malachy O’Rourke’s men trailed for long spells and were left to breathe a sigh of relief as Cavan’s Ryan Connolly struck the inside of the post with a rasping shot in what was the final play of the match.

Playing with the wind, Cavan built up a 0-9 to 0-7 lead at half-time and were still one in front with a dozen minutes to play, but McManus’s well-taken major gave them a two-point lead for the first time and they had the composure and experience to close it out.

The first half was extremely tense and closely-contested, with the sides level on five occasions. Cavan opened the scoring with a Niall McDermott free only for Owen Duffy to level it.

Cian Mackey, possibly the hosts’ best player on the day, curled in his first and the attritional nature of proceedings continued as points from Liam Buchanan, McManus (two frees and one from play), Rory Beggan (45), McDermott (free) and Mackey left it all square at 0-5 apiece on 22 minutes.

Cavan, playing with a strong wind, were struggling to make the ball stick inside and were forced to run it or shoot from long range to engineer scores. A huge point from centre-back Conor Moynagh was cancelled out by a 55-metre Beggan free and when McManus kicked another beauty, Monaghan were in front for the first time approaching half-time.

But Cavan finished the opening period strongly, Johnston tacking on a free and then James McEnroe and Gearoid McKiernan landing fantastic scores from distance to leave it 0-9 to 0-7 at half-time.

Monaghan, though, have amassed so much experience that they were never going to panic and, given the strength of the breeze, they looked the likelier winners despite the half-time deficit.

Owen Duffy kicked their first point on the restart and although Martin Reilly replied with a 44-metre free from the deck, Jack McCarron was now growing into the game and he latched on to a great Kieran Hughes pass to point. 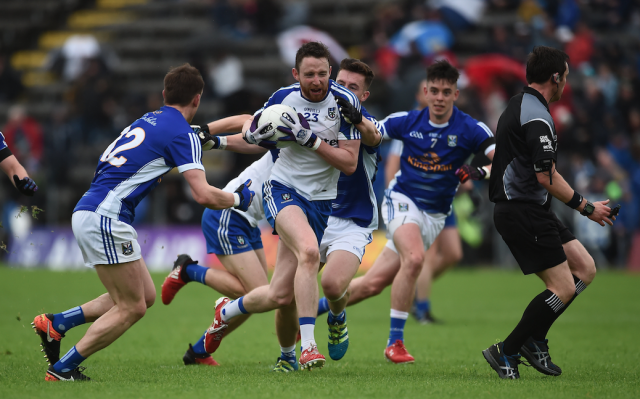 Latton clubman Owen Duffy levelled it on 41 minutes, Cavan hit back with frees from Johnston and McDermott but Farney sub Conor McCarthy blasted over a beauty with his first touch to make it a one-point game again.

And when Monaghan captain Colin Walshe held his nerve to squeeze in another terrific effort, the sides were level once more. Who would step up to grab it?

Cavan put their best foot forward, Johnston drawing a foul and converting before Cavan goalkeeper Ray Galligan saved acrobatically from McCarron with what is an early contender for ‘save of the season’.

But Beggan floated over the resulting 45 to tie matters again. Mackey and sub Dara McVeety combined well for the Castlerahan man to kick his third with 12 minutes on the clock, but, from there till the finish, Monaghan would kick for home.

First, McManus skipped inside and buried a daisycutter under Galligan; then, Owen Duffy pointed another after Monaghan forced a turnover.

From a poor Cavan kick-out, McCarthy slotted his second and although Johnston grabbed a free and debutant Connolly came so close three minutes into injury time, it wasn’t to be – Monaghan march on.