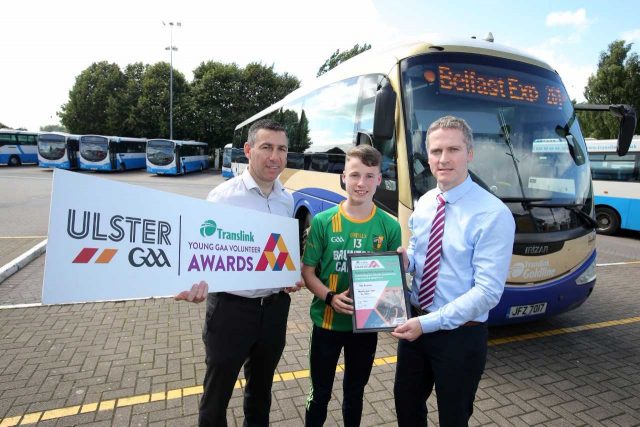 Ned Brunton impressed judges with his dedication and commitment to his club across a range of areas including grounds maintenance, pitch set-up, officiating as an umpire and assistance with the senior team.

Congratulating the young GAA volunteer, Ulster GAA Vice Chairperson Oliver Galligan said, “Rarely would you find a young volunteer making such a huge impact on his club. His efforts on grounds maintenance are exemplary and were really showcased during the All Ireland Féile which was hosted at his club. For a young man to make such a positive contribution to his club is inspirational and I have no doubt that Ned will have a very long and bright future in the GAA.”

“As a Club Ned stands for what we are and what we want to be ….at every age level. Since March, Ned has become the grounds man spending at least an evening and a Saturday mowing the two pitches, strimming, spraying, lining. One of the proudest days for him was the Saturday of Feile when his “Headquarters looked as good as Croker”. To say he is a perfectionist is an understatement.”

“I’m delighted to present this award to Ned on behalf of Translink. It is in recognition of the many hours of hard work he has committed to his club and it’s a privilege to help celebrate these efforts. The standard of nominees was extremely high, so this recognition is a real credit to Ned’s commitment and the impact he makes in his area.”

For more information on the Awards please contact Sharon.haughey.ulster@gaa.ie or phone Sharon on 02837 517180