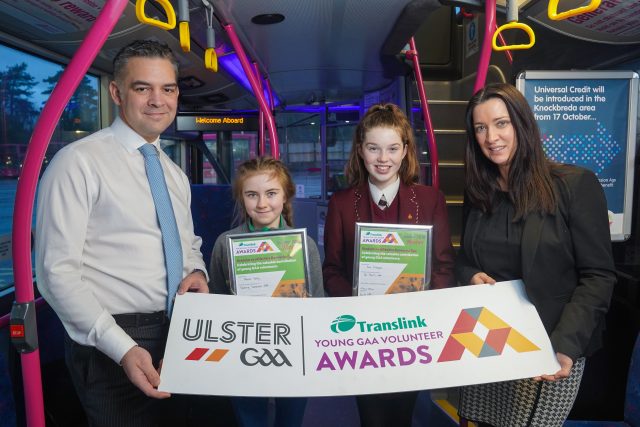 Meabh Kelly from Patrick Sarsfield GAC and Ava Finnegan from St Paul’s GAC, Belfast are the joint winners of the latest Translink Ulster GAA Young Volunteer of the Month award.

The accolade is usually presented to one young volunteer each month whose efforts best demonstrate the volunteering spirit of the GAA. However, this month’s award, recognises two young volunteers who demonstrated the real impact that can be made through volunteering together in sport. In recognition of this, Meabh and Ava are the first ever joint winners of the award.

The 14-year-olds were selected as winners following nominations from clubs across Ulster. The judging panel was particularly struck by the time and effort the pair dedicated to charity fundraising, working together to promote the 5K ‘Colour Run for Anto’. Their efforts galvanised the community around them and helped raise much needed funds for the cause.

“Working together, these girls achieved a great deal and raised money for a very worthwhile cause. However, the impact of their volunteering extended beyond raising money – their work was instrumental in bringing the community together. On behalf of Translink, I would like to congratulate both Meabh and Ava – we are delighted to be able to reward their efforts through the presentation of this award.”

“It was evident from my observations during the lead up to the event and on the day itself that both girls had committed many volunteer hours to make the Colour Run for Anto such a success. It was also great to watch as they struck up a real friendship and enjoyed the experience of helping others together.”

“On behalf of Ulster GAA I’d like to congratulate both Meabh and Eva.  The Colour Fun Run for Anto epitomised the spirit of the GAA without a hurl, or ball in sight and raised almost £11,000.  To be involved in such a large event bringing together the GAA community, both girls from different clubs working closely together made them both very worthy winners of this award.”