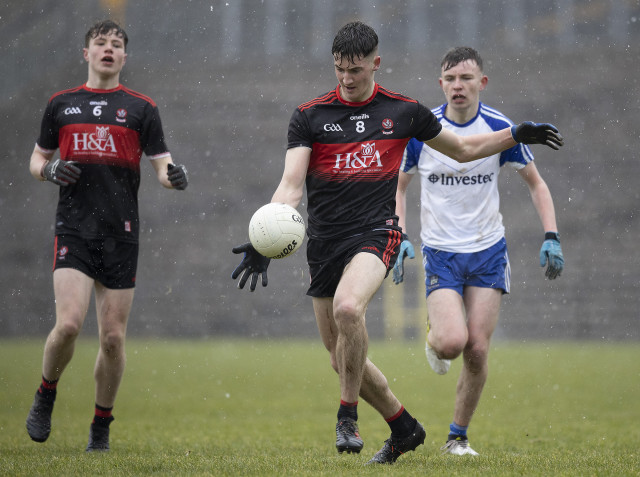 Derry got the better of Monaghan in the opening round of the Dale Farm Protein Milk Ulster Minor Football League. Pic: Fintan McTiernan

The 2020 Dale Farm Protein Milk Ulster Minor Football League got underway on Saturday across the province.

Played in difficult conditions on Saturday lunchtime there was some great football played.

In Dunsilly, Antrim held on to overcome a stubborn Armagh challenge. The young Saffrons led 1-3 to 0-5 at the midway point with Rory McKillop on target with the goal.

Armagh were stung early in the second half with an Eoin Dixon goal that helped Antrim into a 2-5 to 0-6 lead. Try as Armagh might they couldn’t get back on terms and Antrim held on for 2-6 to 0-10 win.

A dominant first-half display helped Derry to victory over Monaghan at Clones. The young Oakleafers race into an early lead with Lachlan Murray and Matthew Downey among the scorers in the opening quarter.

Monaghan responded with a couple of points of their own but Derry responded again with Charlie Diamond and Murray on target to help their side into a 0-9 to 0-2 half time lead.

The second half was a low scoring affair with Monaghan kicking two scores while Derry added a single score to help themselves to a 0-10 to 0-4 victory.

At a blustery Garvaghey, it was Cavan who made the most of the conditions to run out comfortable winners over Tyrone. Remarkably the Breffni side didn’t register in the opening half with three Ruairi Canavan points helping Tyrone into a 0-4 to 0-0 lead at the break.

There was little to choose between the sides until midway through the second half when two Cavan goals in three minutes gave the blues the upper hand and a 2-4 to 0-4 lead. Six points over the final 15 minutes wrapped the points up for the Breffni boys.

Tyrone’s U. 17 team prior to their game against Cavan pic.twitter.com/YhbFLvyK2F

In Ballyshannon meanwhile, Donegal and Sligo played out a draw but like the game in Garvaghey it was a game dominated by the conditions.

Donegal opened up a 1-5 to 0-1 lead at the break, Stephen McFadden with the Donegal goal. Sligo, however, fought right back and got back on terms with 10 minutes remaining but couldn’t find a winner.