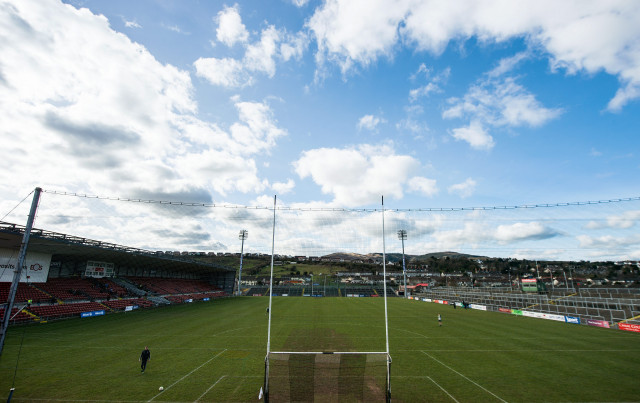 Today’s teams last met in the Ulster Championship in 2014, again at the Semi-Final stage. That game finished in a draw, 0-14 apiece, with Monaghan winning the replay by five.

In fact, you’d have to go back to 2006 for Armagh’s last win over Monaghan in the Ulster Championship, a Quarter-Final victory after a replay.

The noughties were heady days for the Orchard County, a decade which yielded six Ulster titles, a National League, and of course, the holy grail of the Sam Maguire Cup in 2002.

A lot has changed in the landscape of Ulster football since however, so much so that this afternoon Armagh are bidding to end a stretch of 13 years between provincial final appearances, currently the longest wait of any county in the province (2008 to 2021).

Given their return to Division One League football last year and maintaining that status this year, earning a long-awaited place in an Ulster final would be another huge step for Kieran McGeeney’s developing side.

They were pushed to the pin of the collar in the opening half of their quarter-final win over Antrim however. The Saffrons had evidently done their homework and played much of the football at the Athletic Grounds a fortnight ago, only for Rory Grugan’s first half goal giving Armagh the slight edge at the break.

That goal threat was ultimately what separated the sides in the end. Armagh found the net a further three times through a Rian O’Neill penalty and subs Conor Turbitt and Tiernan Kelly in the second half, and Antrim’s gallant challenge dissipated.

The 13-point winning margin by the end may have slightly flattered Armagh, but they’ll be under no illusions over the performance they will have to produce to overcome today’s opponents.

Monaghan themselves had a largely no-fuss quarter-final win over Fermanagh the previous day in Clones. An 18th-minute goal by Jack McCarron sent Monaghan well on their way in a game where they never trailed.

The breadth of scorers will have surely pleased the Monaghan management with the home side registering 12 players on the scoresheet, particularly as star attacker Conor McManus sustained a leg injury late in the contest and was forced to make way. His fitness for this afternoon could have a huge bearing on the game.

Budding talents Aaron Mulligan and Michael Bannigan continued to impress for the Farney, notching five points between them, and marauding runs from defenders Conor Boyle, Dessie Ward and Karl O’Connell to knock over scores were another a telling feature of the Monaghan performance.

These sides met in the League little over two months ago, with Armagh making a winning return to Division One after a nine-year wait when they emerged 1-16 to 1-12 winners in Enniskillen.

Championship is a different ball game however, and today’s contest has all the makings of going right down to the wire.