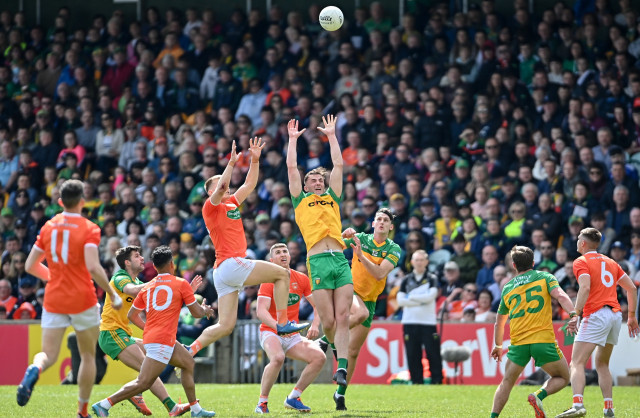 Paddy McBrearty’s 47th minute goal was the defining score as Donegal dismissed Armagh in Ballybofey to advance to the Ulster SFC semi-finals.

The home side’s 1-16 to 0-12 win was more than deserved for Declan Bonner’s men who now look towards a final four meeting with Cavan in two weeks’ time.

McBrearty’s goal, a flowing team move batted to the net by the Kilcar man, stretched Donegal’s lead out to seven, 1-10 to 0-6, and from there they never looked like letting Armagh back into the contest.

The opening 20 minutes was a tight affair, with both sides going score-for-score before Donegal broke out into a three-point lead to go into half-time 0-9 to 0-6 up. Rory Grugan was providing most of the Armagh points, while Donegal captain Michael Murphy was proving his evergreen class at the other end.

Aidan Nugent, a half-time replacement, almost made an instant impact when his high ball into the danger area was superbly fetched by Rian O’Neill but a free out was awarded amid a scramble in the Donegal goalmouth.

Nugent saw a goal effort prevented by Shaun Patton at the near post, and Rory Grugan misfired having won a mark as Armagh set about chipping away at the deficit.

But when McBrearty steered home, the wind vanished from Armagh’s sails, and points from he, Michael Langan and Ciaran Thompson were able to see out Donegal in the end. 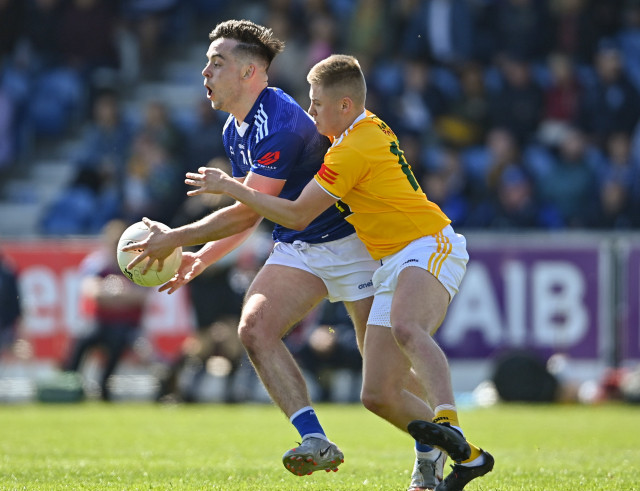 Cavan produced a strong second half showing at Corrigan Park to hand Antrim a 13-point defeat.

Championship debutant had an afternoon to remember, registering 0-8 as the 2020 Champions ran out 1-20 to 0-10 winners.

The Breffnimen never trailed in this game and their domination of the second half to put daylight between the teams who were separated by just one at the break.

Lynch also laid on Gearoid McKiernan’s goal, but Cavan had some huge performances throughout with nine players registering scores on the day.

Mickey Grahams men were in charge from the start, and Gerry and James Smith and McKiernan had them three up to no score on 19 minutes, despite a strong breeze blowing against them.

The home side finally got on the board in the 24th minute as Ryan Murray pointed brilliantly out on the left, and they began to get on top in the closing stages of the half with Murray again and Dermot McAleese finding the target to go within one at the break, 0-7 to 0-6.

Conor Murray briefly tied the game from a free two minutes after the restart, but Cavan started to rattle off the scores with ease with that man Lynch to the fore. Captain and goalkeeper Raymond Galligan came up to launch over a massive free, before Antrim were reduced to 14 men when Michael McCann picked up a second yellow card on 52 minutes.

McKiernan’s goal just before the hour mark sealed the deal completely, and Cavan kept the foot on the pedal in the closing stages with Lynch further adding to his tally while Martin Reilly, Paddy Faulkner and Jason McLoughlin added to the Cavan’s total.