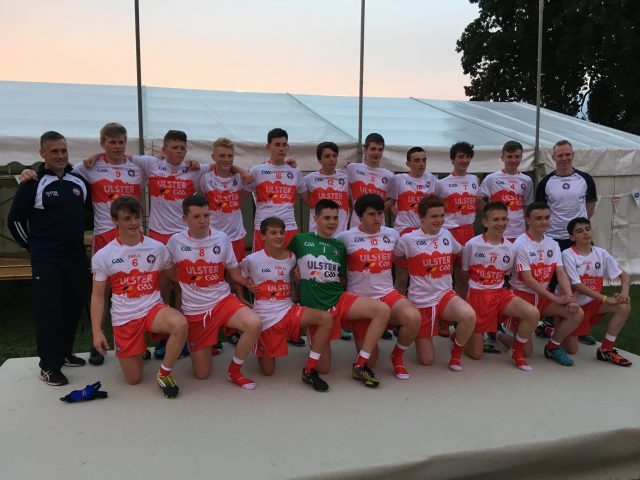 The Cúchulainn Cup is Ulster GAA’s flagship cross-community project which runs each year. The  aims of the project is to promote Gaelic games to those who may be unfamiliar with them, while also encouraging schools to come together to learn, play and compete. The Cúchulainn Cup takes place in Spring annually involving invited schools from across Ulster in a day of skills-tests and games in Gaelic Football and Hurling.

The goal of the project is focused on extending the hand of friendship to schools, communities, and families who would not normally associate with the GAA. This is achieved by inviting schools from a town (maintained, controlled and integrated); to come together to form a cross-community under-16 Cúchulainn Team. Pupils who have very little interaction with the GAA have the opportunity to learn more about the Association through “Getting to Know the GAA” talks, and are afforded the opportunity to take-part in Gaelic Games through “Taster Sessions”. Schools select 5 pupils from the “Taster Session” to represent their school in their “Cúchulainn Team” made-up of pupils from other schools in their town.

There are many advantages to a school in becoming involved. Firstly the players are given the opportunity to experience new sports, learning new skills which are transferrable across many sports. The coaching is supplemented with a visit to each school by Ulster GAA Staff to give an insight into the background of the GAA. The project aims to broaden horizons, and give a better perspective of an Association participants may have little knowledge of.

Feedback from participating schools highlights that the major positive of the Cúchulainn Cup is the opportunity for players to integrate and spend time with their peers.

Many friendships have been forged between players through their involvement in the programme, something which would simply not have happened otherwise. Ulster GAA are proud of this and will continue to promote an environment of mutual respect and understanding.

Of course a huge advantage to the schools is the forging of better working relationships between local schools. Once again feedback from teachers has been hugely positive of the relationships established through collective goals and activities.

We are regularly reminded about the need to be more physically active. Perhaps the opportunity to try Gaelic Games will be the catalyst for a Cúchulainn Cup participant joining a GAA club, or another sports club? The GAA club network is extensive and Ulster GAA will link any player to their local GAA club should they wish to do so; many of whom do.

Finally, more and more we are reminded that entities within communities will need to engage more closely with each other in order to share resources. It is therefore an excellent time to break-down barriers; the Cúchulainn Cup being one example of how Ulster GAA are playing a part in community leadership.

To enquire about getting your school involved in the Cúchulainn Cup, or for more information please contact a member of the Community Development Department within Ulster GAA.

Department for Communities Programme: Sport – A Home for Lifelong Volunteering 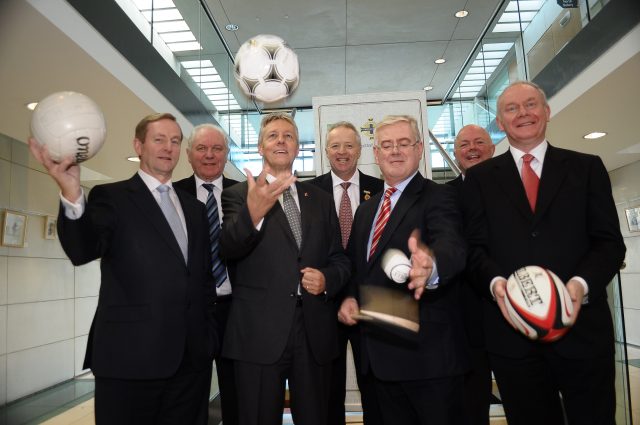 Ulster GAA are partnered with the Irish F.A., and Ulster Rugby in a Department for Communities funded-project called “Sport – A Home for Lifelong Volunteering”.

Through this project each of the governing bodies of sport are funded two full-time staff posts, namely; a Club & Community Development Officer, and a Volunteer Development & Policy Officer. These posts are tasked with supporting clubs and volunteers to further develop their respective selves, and are on hand to assist with specific club issues. GAA volunteers will be familiar with the Volunteer Development Pathway, Club Maith, the Club Planning programme and Goldmar, to name a few of the ways in which clubs and volunteers are supported.

In addition to club and volunteer development, an important aspect of the DfC project is the close working relationship developed between the three sports. This culminates in much learning from one another, identifying best practice and implementing similar support in the sports where it is not already present. Over the course of a year the three sports will host a series of joint events which club volunteers are invited to attend. These joint events showcase some of the great work ongoing within the three sports, enabling Ulster GAA to learn from the other sports, and vice versa.

This is a hugely important programme within the Community Outreach sphere, as sports will often find out they have more in common than they think, with volunteers facing the same issues across the board. It is hoped that this programme will continue to run long into the future, providing more much-needed support to GAA clubs and volunteers.

Ulster GAA is one of the key-players in the phenomenon of a “Game of Three Halves”. The concept was first developed in the mid-noughties by Paul Brown, Youth Co-ordinator at Knock Presbyterian Church, who thought offering young people the opportunity to play the three most common sports at one time and place would be a great way to bring them together. Thus Ulster GAA, Ulster Rugby, and the Irish F.A. became the sports on which the Game of Three Halves is modeled.

Since then the concept has developed so that well-organised sports camps are the order of the day. A typical format for the day involves rotations of coaching stations at which the basic skills of each sport are practiced. The day is finished-off with, as the name suggests, a game of three halves. You only have to see the day in action to see how much interaction and fun are being had by those involved.

The model has been rolled-out extensively with groups in the Greater Belfast area, primarily due to the involvement of Peaceplayers International who have a remit for cross-community work. Peaceplayers add a fourth station of community relations, which they deliver through the vehicle of basketball.

Although many Game of Three Halves events do take place each year, Ulster GAA would encourage clubs to take-on the mantel of organising a Game of Three Halves in their own community. The steps are quite straight-forward, and perhaps the universal model of a Game of Three Halves will prove to be an effective way in which to knock the door of a neighbouring sports club? Although the Peaceplayers element of the programme is a valuable addition, it is not essential, and clubs are very much empowered to organise their own event, with little / or no expense. Clubs are encouraged to use their own facilities and coaches (you will need to check with your insurance but normally it isn’t a problem), with the idea being that should a child wish to get involved in your club, they are already familiar with your club grounds and some friendly faces. Although the model has been used with children and young people, there is no reason why it cannot be enjoyed by adults also. A Game of Three Halves is a great event to run over school holidays, and often your local Council will have small pots of money to cover some or all of any costs incurred.