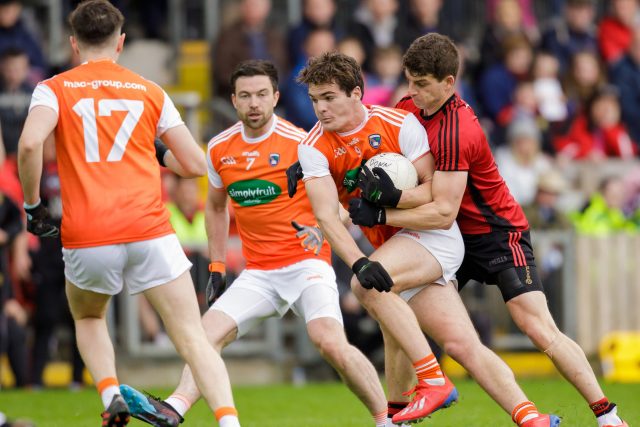 It took extra-time for Armagh to get the better of Down in what was a thrilling encounter at Páirc Esler. The game went right down to the wire and only one point would separate the sides at the final whistle. It was the first Ulster Championship victory for Armagh in the five years of Kieran McGeeney’s tenure and the first time in almost 60 years that an Armagh team had come to Newry and won a Championship game.

The introduction of key players to the Armagh team at crucial times proved effective as James Morgan (0-1), Mark Shields (1-0), Stefan Campbell (0-2) and Andrew Murnin (1-1) all contributed a total of 2-4 from the bench. Likewise Paddy Tally had his own fire power to introduce in James Guinness (0-2), Barry O’Hagan (0-1), Paul Devlin (0-2) and Owen McCabe (0-1) who contributed to a tally of 0-6 as substitutes. 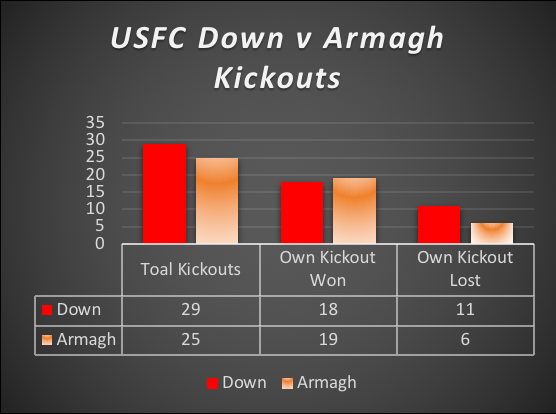 Armagh came out on top of winning their own kickouts on a percentage of 76% to Down’s 62%. A number of factors contributed to this including the sending off of Down midfielder Caolan Mooney which would have left Armagh more opportunities to find a spare man on their own kickouts. Down also lost their first choice goalkeeper Rory Burns to a black card when he was dispossessed carrying the ball out from defence. It took Down a period of time to find rhythm again on their own kickouts as they battled for possession by choosing to going long on the next four restarts.

Armagh’s ability to win their own kick-outs particularly in extra-time through Jarlath Óg Burns and substitute Ben Crealey proved crucial in helping to gain primary possession and get them back in the game having trailed by three points at one stage. 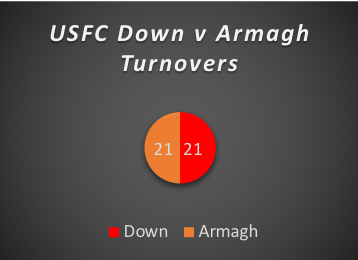 Considering the extra-time which was played the number of turnovers over almost 100 minutes, 21 turnovers a piece wasn’t as high as expected. In comparison to Cavan v Monaghan in Kingspan Breffni the day previous, they recorded 19 and 18 respectively over 70 plus minutes. This might be explained by the drier weather conditions in Páirc Esler.

Over the course of the full game Armagh out-shot Down 34-28. Of those shots taken Armagh had a 56 per cent success rate whereas Down had a 57 per cent success rate. Although Armagh had more shots they were not as efficient due to their 11 wides and four short. Below is a graphic showing areas on the pitch where both Armagh and Down got their scores from.

That Armagh had more shots is probably not a surprise given that they had an extra-man for the entire second half. Their ability to create chances especially in the second half of extra-time proved vital as they advanced. 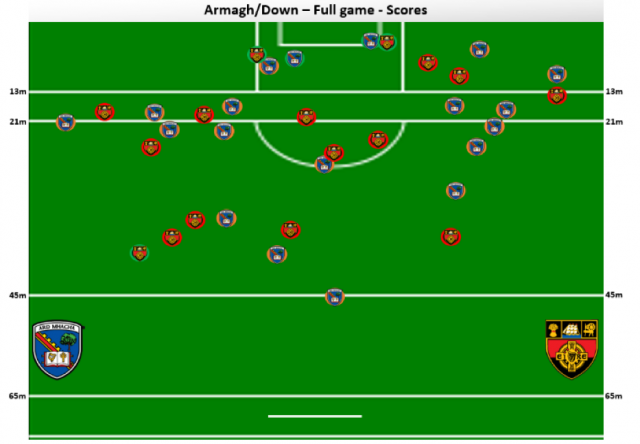