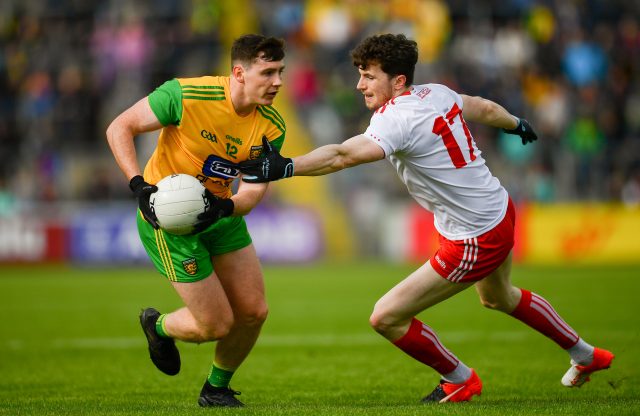 Inspirational performances from Jamie Brennan and captain Michael Murphy paved the way for Donegal to reach the 2019 Ulster Senior Football Final as they advanced past Tyrone. Right from the opening whistle Donegal imposed their dominance on the game as they looked a fresher, more energetic side than their Tyrone opponents. As we look at the stats we can identify some of the key areas where Donegal came out the victors, enabling them to reach their eighth final in nine years.

Man of Match, Shaun Patton, produced a fine display of goalkeeping between the sticks for Donegal. Not only did he keep a clean sheet, but made two vital point blank saves and ensured Donegal retained a total of 90% of his own kickouts. Time and time again Patton was able to find his targets from the restart through both long and short kicks. Michael Murphy also produced a masterclass in fielding as Donegal’s kickout strategy drew Tyrone players towards the centre of the pitch allowing Murphy to find space on the wings. Tyrone had to settle for a reasonable 70% retention rate on Niall Morgan’s kickouts, albeit a high contributing factor to this being Donegal retreating in the final 10 minutes offering up possession in favour of closing space in their defence and seeing out the result. The high press on the Tyrone kickout caused Morgan to kick long early in the game with Donegal seeming more than happy to fight for possession around the midfield area. No doubt Cavan will be looking to narrow down Patton’s total success rate in this year’s championship of 95% (100% against Fermanagh and 90% against Tyrone). 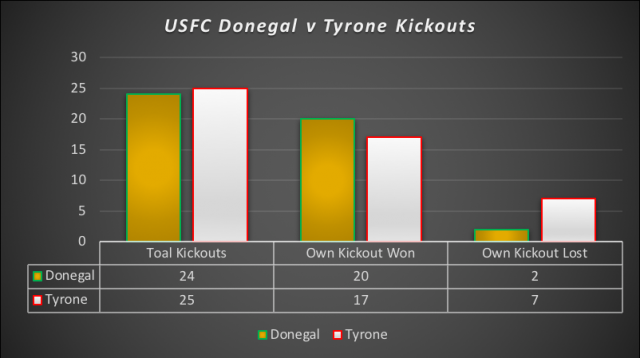 Both teams got off to a flying start, with six points in the opening six minutes but Donegal got the head start they needed with Jamie Brennan rounding Morgan for the game’s opening and only goal. Only minutes later Donegal could have had another has Brennan again saw another effort on goal crash off the post. At the other end, Tyrone had their own chances on goal. Over the span of the entire game Tyrone had four efforts on goal which were either saved by Patton or blocked by their defence. 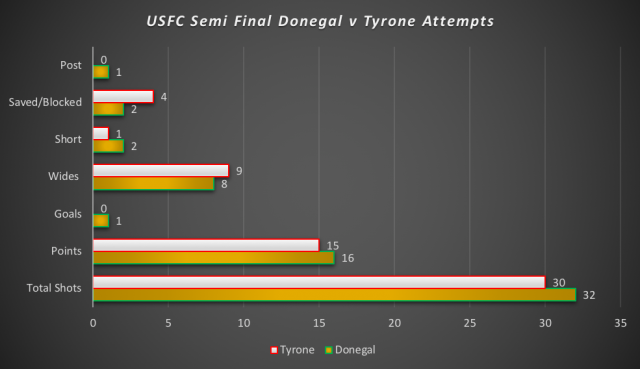 Even though Donegal had only two more shots that Tyrone they were also more efficient as they had a total efficiency of 53% from their shots in comparison to Tyrone’s 50% from shots. Where Mickey Harte will be disappointed though, is that from play Tyrone only had an 39% efficiency rate. From 23 shots from play they were only able to convert nine times. Credit must go to Declan Bonner and how well he had his team marshalled to prevent Tyrone from penetrating their defence into scoring positions like they had done against Antrim and Derry. 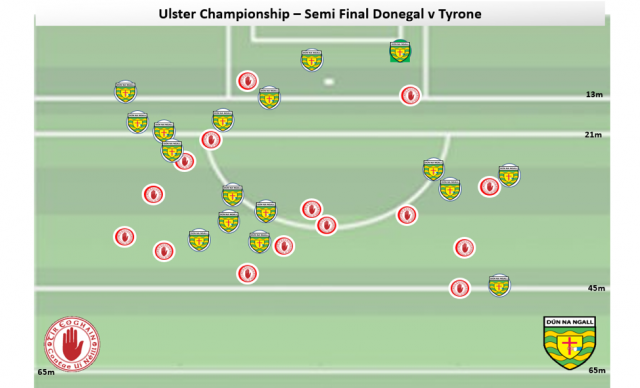 The patience of Declan Bonner’s men stood to them defensively as they were able to thwart a large proportion of Tyrone attacks by getting significant numbers of men back. Donegal were then able to counter attack at pace and in numbers exposing gaps in the Tyrone defence. The Donegal management were able to design a system that relied on Tyrone setting up in a similar style to that which saw them progress in their Championship wins over Derry and Antrim. Donegal were able to counteract this nullifying the threat of Cathal McShane and Mattie Donnelly inside with disciplined tackling.