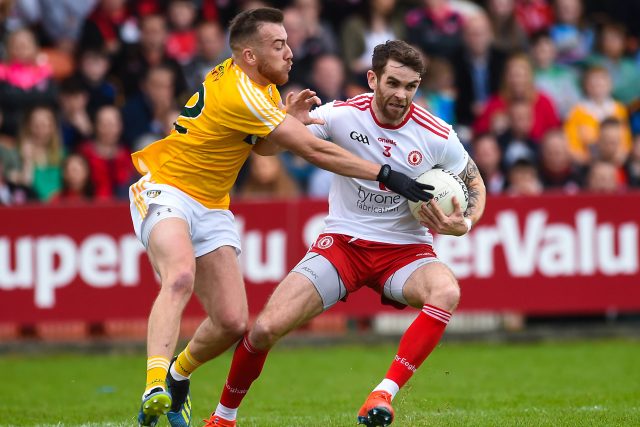 A superior Tyrone outclassed Antrim in this quarter-final and this was reflected on the scoreboard and in the game statistics. The Saffron men did however, cause concern within the Tyrone defence and they scored two goals from running plays and had other goal chances on the day. 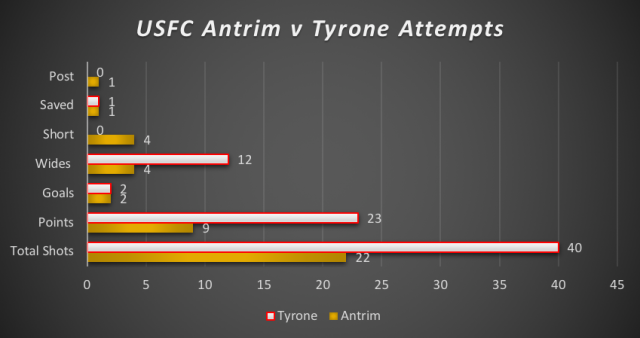 Over the period of the whole game, Tyrone had almost twice the number of shots as Antrim creating 40 scoring opportunities to Antrim’s 22.  Not only did the Red Hands create more point scoring chances they were more efficient in their shooting (62.5% efficiency) whereas Antrim were less successful (50 per cent efficiency). While Antrim only had four wide’s they also dropped four shots short.

Again, the player who contributed most on the scoreboard was Tyrone’s Cathal McShane with a personal tally of 0-6 (0-3 frees). On the day, however, Tyrone’s scoring prowess was distributed among 13 different players in total. With the caliber of players like Kyle Coney, Connor McAliskey and Darren McCurry contributing 1-4 between them, the Tyrone management are in an ideal position where they have proven two games in a row they have forwards coming off  the bench who have a positive scoring impact on the game. 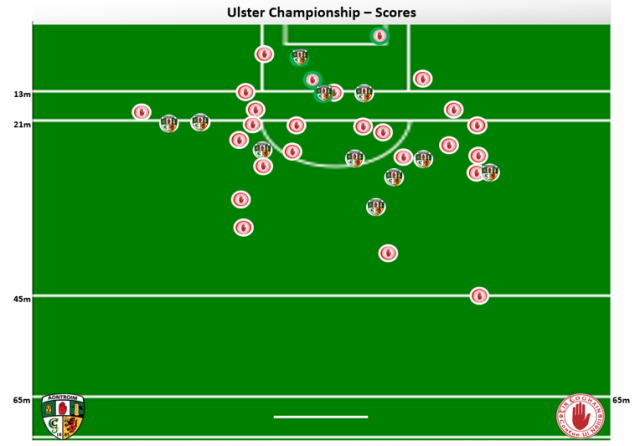 Antrim goalkeeping debutant, Padraig Nugent, had a tough day at the office as Tyrone forced a high press on the Antrim restarts, resulting in the Antrim shotstopper having to go long with all but two of his first half kickouts. The long ball out resulted in many of the possessions being gathered up as breaking ball in the middle of the field by both teams. In comparison, Niall Morgan was more successful over the 70 minutes with 80 per cent retention from his own kickouts, partly due to Antrim retreating men in the hope of turning over possession further down the field.

In relation to work-rate off the ball and making the least amount of mistakes, turnover rates have a fairly high contribution when it comes to the outcome of a game. Significantly, Tyrone made 19 turnovers to Antrim’s 13. A high portion of these being in the middle third. In comparison to the first round game against Derry, Antrim managed to turn over Tyrone 13 times in comparison to Derry completing six successful turnovers.

Although Tyrone came out on top in almost all areas of the game, Antrim did put up a spirited performance and second half goals from McCormick and Fitzpatrick from driving runs will possibly give Donegal some food for thought on attacking options as they go head-to-head in Kingspan Breffni.